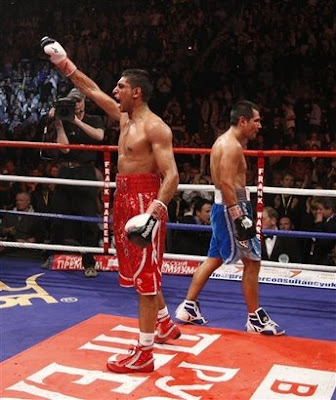 I did not see last night's fight between Amir Khan and Marco Antonio Barrera, at the M.E.N Arenain Manchester,  and I don't want to rain on  Khan's parade. From all I have read and heard about the fight, Khan did a great job, he was quick and accurate, and fought with confidence, and considering the devastating loss he suffered last September at the hands of Briedis Prescott, it was quite an accomplisment to comeback and beat a future hall of famer. It was a huge step up to take on Barrera. It took some real nerves.

However, I cannot help but feel the fight was inconclusive, even without seeing it. The fight was stopped in the fifth round due to an accidental headbutt. The rules are that a fight stopped within the first four rounds is ruled a "No Contest". The headbutt that resulted in the cut occurred in the first round.  My understanding is that it was a horrendous cut from the beginning.  Why wait for the fifth round? 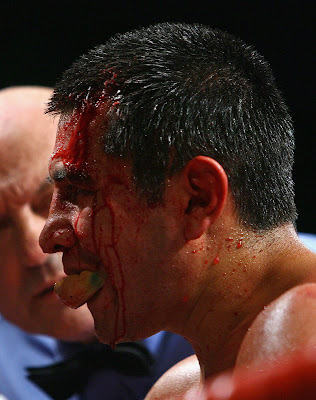 The cut itself and the blood that flowed into Barrera's eyes  obviously affected Barrera's vision, as well  as his performence against Khan. Barrera, past his prime and obviously not the fighter he once was has still fought a decent level of competition, fighting and winning against guys like Paulie Ayala, Rocky Juarez, beating fellow Mexican and future hall of famer, Erik Morales in their rubber match, as well as going the distance with, albeit  losing by decision to Manny Pacquiao, in a valiant effort in their second fight (no shame there).
My point is: While Barrera is clearly aging he has proven himself not to be completely washed up. So one has to wonder, did Khan beat  Barrera because he was the better fighter last night? Or did he win because Barrera, affected by the cut and the blood flowing into his eyes, was unable to fight at his peak? A win is a win is a win, and I'm not going to taint Khan's victory for him. He won and should be congratulated. But if I was Khan, I would want to remove all doubt.  I would want it to be conclusive.
By Randy De La O at March 15, 2009

The fight is much looked forward to with Amir Khan stepping in the ring after a long time. With or without cable, watch Amir Khan Vs Terence Crawford live online from anywhere!