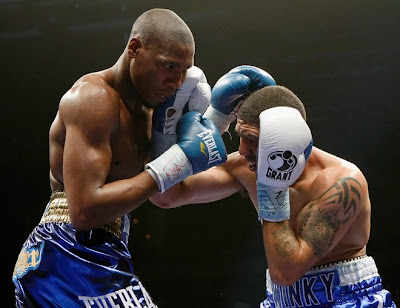 “I’m hot,” Paul Williams said. “Somebody is going to have to step up to the plate if they want to eat. All of those guys, they’ve got to call me out now. I’m tired of calling people out.”

It's pretty hard to argue with Williams after his one sided beat down of Ronald "Winky" Wright. He was too sharp, too big, and too busy for Wright, who had no answer for Williams in last night's fight.

Factoring in the Antonio Margarito cheating factor: Most of the controversy goes to the Antonio Margarito vs Miguel Cotto fight. Were Margarito's gloves loaded. We'll never really know and the fight will almost assuredly have an asterisk next to it in the record books. But maybe a bigger and more telling question might be Were Margarito's gloves loaded when he fought Williams? If they were, it says a lot more about the Williams fight that the Cotto fight. You have to ask Just how good is Williams really?
By Randy De La O at April 12, 2009

The guy is a freak....he's tall...has a reach as long as Klitschko...throws a million punches each round and has a rock jaw.

Winky Wright has made a career out of making his opponents look bad....and Williams made Winky look like a mediocre fighter.

Who is going to step in the ring with Williams now?