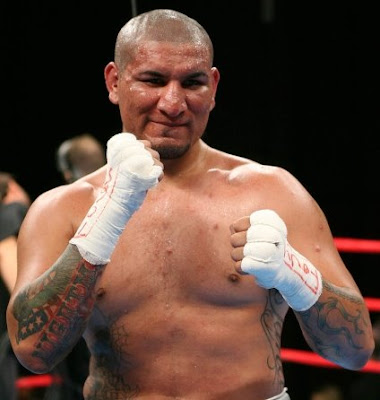 Ryan Burton: What is new with you?

Cristobal Arreola: I just signed Darrell Hudson to be my strength and conditioning coach yesterday. I found out my next fight is going to be in September. Exact date don't know. Exact person don't know. Who ever it is I know its in September and I don't really care who it is against. I just know I will be ready.

RB: What made you and your team decide to hire a strength and conditioning coach and what made you decide on hiring Darrell Hudson?

CA: We asked a lot of people on who they would recommend and his name came up a lot. He is a great trainer. He has a great track record.

RB: Were there any concerns at all about the allegations surrounding him with Shane Mosley and the steroid scandal?

CA: Not at all. He is going to give me the same steroids that Shane took (laughing). Nah man I am not worried about that man. You can't go off of stuff like that. We are behind that stuff. What ever happened happened. Shane is his own man what ever he took he knew.

RB: You said you are fighting in September but you don't know who against. Do you have an exact date and venue?

CA: No I have no idea. Mr. Goosen told me the fight would be sometime in September and be in California so I am looking forward to this. I am going to working with Darrell. Right now I am not worried about who I am going to fight. I am concentrating about getting in shape and how I look going into the fight. A lot of people are saying Vitali Klitschko but I am concentrating on being ready.

RB: Does Darrell Hudson have a target weight for you?

CA: The thing is we don't have a target weight. We want to go in better shape. I am going to do conditioning. The thing is I am a fat boy. I may look like crap with my shirt off but I am ready to go.

RB: I have seen heavier guys have more energy than thinner guys before. It seems like metabolism has a lot to do with it. Do you just want to go in the healthiest and most in shape Chris Arreola you can be?

RB: By bringing in Darrell Hudson now and your fight not till September this is basically giving you all summer to get in shape. Was that the plan?

CA: Yeah I want to be able to walk around without my shirt this summer! (Laughing)

RB: What are your thoughts on the Wladimir Klitschko vs David Haye fight?


CA: You know I am happy for Haye he got that fight. He really doesn't deserve it. He beat a guy (Monte Barrett) who is now considered a journeyman. That is all he has done at that weight. He was able to talk his into that fight. It should be a good fight.

RB: Do you have a prediction for that fight?

CA: I believe that Vladimir Klitschko beats him within 8-10 rounds.

RB: You were ringside for the Andre Ward vs Edison Miranda fight. What did you think of that fight?

CA: Great fight man. You know Andre boxed well. I thought Miranda had him hurt a couple times but Andre was able to stick to his game plan. Andre fought a great fight.

RB: You have 4 months till you fight. Hudson will get his chance to put his stamp on you What is the reasoning behind that?

CA: I just signed him yesterday. I don't versus bringing him in during an 8 week training camp. I don't want to go at this half ass. I want to be in shape and be ready to spar 7-8 rounds before training camp.

CA: You know what, in my mind I will be honest with you, I don't really care about that. I just care about getting ready for that September date against whoever. I just want to get rid of some of this fat and be in the best possible shape I can be in.

RB: It would be nice for an American heavyweight to create a buzz that we haven't had since Evander Holyfield's hey day. Even thought he is British we haven't had a buzz since Lennox Lewis either.

CA: You know what I am going to do it for fat people every where (laughing). Seriously, a lot of people didn't appreciate Lennox. Now tht he is gone people are missing him. Now they wish he was back.

RB: Do you have a message for the fans?

CA: Come September man, you are going to see a new Chris Arreola in shape. You will see the same old fight and the same fighter but I will shed some pounds. I just can't wait for the fight.

RB: I will give you a ring in another month or so to see how your conditioning is going.

Darell is a good coach but he is also a cheap weasel, that use steroids in the pass and was responsable for the Mostly Steroids scandal, we know the truth about is pass habbits!