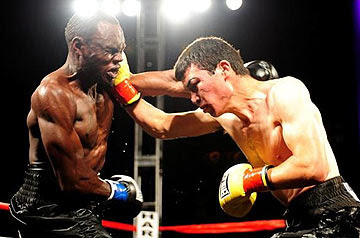 Photo by Paul Gallegos/Fightnews
From Louie Burke
Well, it was a war and by far the best fight of the night. King, a south-paw didn’t waste any time trying to land his straight left just missing it’s target but indicating that was his power shot. Abie found a home for his left hook which hurt King multiple times throughout the fight. In the fourth, King caught Abie with straight left, wobbling him, but as he went for the finish, Abie impressively bobbed, weaved and held on til he re-gained his whereabouts, enabling him to survive the round. In the fifth, both fighters clashed heads, causing a stream of blood, from a cut above Abie’s hairline. In between rounds the bleeding was stopped and never played a factor in the fight The rest of the fight, Abie stayed busier and out hustled King. I grew a little grayer tonight but was pleased with the victory. The scores were 60-54 and 58-54 twice.
Thanks for your support,
Louie
By Randy De La O at May 22, 2009