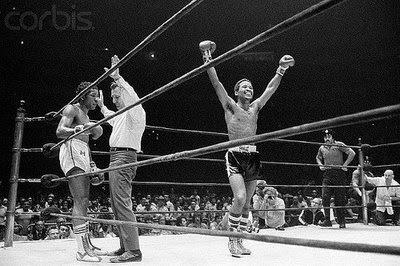 Miguel Cotto is the latest in a long line of wonderful prizefighters from Puerto Rico. Like the best of his compatriots, he is highly diverse; when facing a puncher, he can move and box with the best of them. When he's the puncher, there may not be a more dangerous young guy at 140 pounds. He's young still and growing, but shows poise beyond his years and has consistently faced stiff competition. Will he be remembered among the great Puerto Rican fighters when he's done? Only time will tell, of course, and he's got a very tough act to follow. Here's one man's list, presented in alphabetical order, of the best fighters Puerto Rico has produced.

Wilfred Benitez
Benitez was the best defensive fighter of his era, and not by a little. You just had to see him fight once to know it. If you saw him boxing rings around the great Antonio Cervantes, at 17 years old for cripes' sake, or Carlos Palomino or Roberto Duran, you knew how special he was. He hated to train and loved to party but if you want to see one of the smoothest defensive fighters of the last 50 years, get a tape of prime Benitez. He was pure magic.

Hector Camacho
There are those who still don't take Camacho seriously because of his persona and ring style, but the Camacho who tore through a pair of divisions in the early 1980s was a very good fighter. He beat Rafael Limon, Rafael Solis, Jose Luis Ramirez, Freddie Roach and others. Even later on he was still too good for Ray Mancini, Vinny Pazienza, Howard Davis and Greg Haugen (he also lost to Haugen). And he proved his heart once and for all when he lasted the distance with Julio Cesar Chavez, despite taking a terrific beating.

Esteban DeJesus
DeJesus wasn't only the first guy to beat Roberto Duran. He beat a lot of talented fighters, such as Ray Lampkin and Johnny Gant and Alfonso Frazier. Duran will forever overshadow him, but what's terrible about being second best to maybe the greatest lightweight ever? Of DeJesus' five career losses, two were to Duran, one was to Antonio Cervantes, and another was in his very last fight, to Saoul Mamby. That's nothing to be ashamed of.

Carlos DeLeon
DeLeon is another guy many don't take seriously, but he got a lot accomplished in the cruiserweight division. He won a piece of the title four different times and beat about every decent cruiserweight there was throughout the 1980s. It wasn't a very deep division and DeLeon wasn't especially dominant, but he was a very stubborn, skilled fighter who fought at the top of his division for nearly a decade. What more can you ask a fighter to do?

Wilfredo Gomez
Gomez was a magnificent puncher with underrated skills and a cannon of a right hand. He still holds the record for title defenses at junior featherweight with 17, and also owns the fourth longest knockout streak ever, at 32 straight. He stopped 88% of his opponents and fought the best of a brilliant era. It's true that in the biggest fight of his career he crashed against Salvador Sanchez, and Azumah Nelson did a job on him too later on. But at his best, Gomez was a 122-pound Godzilla.

Carlos Ortiz
Ortiz couldn't punch like Gomez or box like Benitez but on his day almost no one put the two together the way he did. When he had to move and box he did, like when he decisioned and dethroned the power-punching Joe Brown to win the lightweight title. But he liked to punch better than anything and when he did it right, which was most of the time, he was a sight. There wasn't a better or more fluid combination puncher in the business when Ortiz was in his groove. He could do it all.

Edwin Rosario
In an era that was full of big punchers, Rosario may have been the best. His right cross produced many of the most chilling knockouts of the period and was a feared weapon. The left hook was good, too. A single hook to the point of Hector Camacho's chin in their close bout turned Camacho into a safety-first boxer for the rest of his career. "Chapo" was flawed, but most of the time his power made up for it. It was enough to get him elected posthumously into the boxing hall of fame this year.

Jose Torres
Torres' one-punch, body-shot kayo of Willie Pastrano in 1965 is reflective of the kind of fighter he was early on: calculating, efficient, and a brutal puncher. He softened somewhat as a champion - he admits the drive to defend the title wasn't as great as the drive to win it - but at his best he was superb. Neither all puncher nor all boxer, he could do most things very well and is today one of the game's most respected elder statesmen.

Felix Trinidad
Things ended badly for Trinidad, but they do for most fighters. He had a heck of a run. From the time he knocked out Maurice Blocker in 1993 to his controversial decision win over Oscar De La Hoya in '99, there wasn't a more dominant champion in the game. He was deadly as a welterweight and even the move to 154 didn't diminish his power -ask Fernando Vargas or David Reid. His destruction of William Joppy, a full-fledged middleweight, was breathtaking. When you're talking about great Puerto Rican fighters, Trinidad is right near the top.

Wilfredo Vazquez
Vazquez was a three-division titleholder and one of the tougher featherweights around for the better part of the 1990s. He's one of a handful of fighters from the era with more than 50 career wins, and scored 41 knockouts by the time he was done. No one will ever mistake him for one of the great featherweights ever, but Vazquez did very well for himself with solid skills and a killer of a left hook. It's possible that he might have wrung out a few more wins had not the more athletically gifted Naseem Hamed come along when he did.
By Randy De La O at June 28, 2009