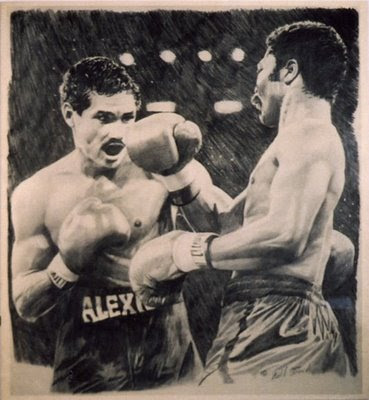 "See, I respect boxing because it has given me so much and that’s why I will never allow anyone to mistreat the sport of boxing if I can help it."
- Alexis Arguello 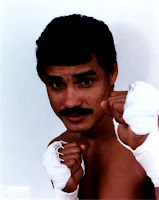 By Randy De La O
In an era that produced such stellar fighters as; Roberto Duran, Sugar Ray Leonard, Marvin Hagler, Tommy Hearns, Wilfredo Benitz, Wilfredo Gomez, Salvador Sanchez, Bobby Chacon, Danny "Little Red" Lopez, Ruben Olivares , and in a sport where even the contenders held the mantel of greatness with aplomb and grace, Alexis Arguello stood as tall as any of them. In an era where great fighters fought each other for the right to be called the best, Alexis Arguello fought the best.
Arguello fought his first fight forty one years ago, August 1, 1968 in Managua, Nicaragua against someone named Cachorro Amaya, getting stopped in the first round of a scheduled four round fight. He fought his last fight on January 21, 1995 in Las Vegas, Nevada, losing a ten round decision to Scott Walker. In between those years Arguello won titles in three weight classes; Featherweight, Super Featherweight, and Lightweight. He lifted the WBA Featherweight crown from Mexican great "Rockabye" Ruben Olivares on November 23, 1974 stopping Olivares in the 13th round of their 15 round fight. He successfully defended his title several times before moving up in weight to challenge Alfredo Escalera for the WBC Super Featherweight title. The fight took place on January 1, 1978 in Escalera's home turf of San Juan, Puerto Rico. Arguello won a hard fought and exciting fight by stopping Escalera in the 13th round. On June 20, 1981 Arguello once again moved up to challenge the respected WBC Lightweight champion from the United Kingdom, Jim Watt. The fight, which took place at the Empire Pool, Wembley, London, went the distance. Arguello won the fight with a 15 round unanimous decision. It was Watt's last fight and Alexis Arguello's third title.
Arguello defended his titles against the likes of Bobby Chacon, Ruben Castillo, Cornelius Boza Edwards, Jose Luis Ramirez, Rafael "Bazooka" Limon, Andy Ganigan, Ray Mancini and so many more. He never gave anything but his best when he stepped into the ring. He was a champion in the truest sense of the world. He was also a champion with compassion. Who can forget his fight with Ray Mancini, who fighting valiantly, as much for his father as for himself, was finally stopped in the 14th round of their fight. Arguello, as much a gentleman as he was a champion, put his arm around Mancini and reminded him, that he too failed in his first bid for a world title, a 15 round decision to Ernesto Marcel of Panama. He encouraged Mancini and let him know that his day would come. That act of mercy and compassion would become his signature, his trademark.
Arguello was already an all time great when 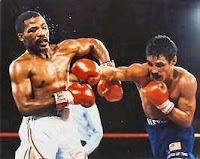 he moved up once again to
challenge the great Aaron Pryor for Pryor's WBA Junior welterweight title, for an unprecedented fourth title. On November 12, 1982, Alexis Arguello and Aaron Pryor fought their way into boxing immortality, in one of the great fights of the 1980's, a fight that would stand out in any era.
On this night it would be Aaron Pryor that would have his arms raised in victory. In the 14th round, after a grueling, exhausting and exciting fight, Alexis Arguello was knocked out, and in a sickening manner. It was painful. Up to that point it was still anyone's fight. Arguello had landed right hands that would have knocked out middleweights but Pryor was at the top of his game that night. There would be no fourth title for Arguello.

Arguello had two more fights before once again challenging Aaron Pryor for the title. His first fight after his loss to Pryor was against Vilomar Fernandez of the Bronx, New York, by way of the Dominican Republic, winning a 10 round decision and avenging an 1978 loss to Fernandez. Next up was former WBALightweight Champ Claude Noel. Noel was knocked out in the 3rd round. The second Arguello-Pryor fight ended with a 10th round KO of Arguello. Arguello retired but came back two years later to fight Pat Jefferson, knocking him out in the 5th round. His next fight was with former WBC Lightweight Champion Billy Costello. The durable Costello was stopped in the fourth round.
Arguello has been a favorite of mine from the very beginning. He was the epitome of coolness in the ring and the master of patience. He was a master counter puncher and a consumate professional. It's not enough to say that he was a great Latin fighter, he was a great fighter, a great champion. He will be missed by his fans.
I met Alexis Arguello in 1976 while training at the Main Street Gym in Los Angeles. He was training for a fight. I can't remember who his opponent was but looking at his record the only fight that shows in that time frame is a fight with Salvador Torres at the Forum in Inglewood, a fight he won by a 3rd round knockout. Arguello was only there a week or so but I had the chance to meet him, talk with and shake his hand. He was very humble, reserved and quiet.
Alexis Arguello died earlier today, the victim of a self inflicted gun shot wound. A suicide. I cannot imagine what demons drove him to such an act. Alexis was born on April 19, 1952. He was 57 at the time of his death. It is a great loss to his family and friends, his countrymen and the sport of boxing. He will always be remembered as a class act. A good guy. A man who gave his all to his sport. Even in losing, he lost like a champion, going out on his shield. He will always be a champion. He belongs to history now.
My condolences to the family of Alexis Arguello. Rest in peace Champ! You will be missed.

This is the best commentary I've read on the tragedy;I have nothing to add-particularly-I'm not the first guy to hope that Nicaragua "brings in an outsider" for this(I trust Aaron Pryor to run the police investigation-and do the autopsy more than anyone in Managua).Michael Jackson's autopsy results(now there's a mystery) are weeks away-and "suicide"-this early jes' don't sound Kosher.The public "deserves the truth"-not the showbiz;as Randy would say...Arguello was a mensch.

"Arguello was a mensch" Truer words were never said.

We may never really get the truth but somehow the words "Suicide" and "Alexis Arguello" just don't go together.