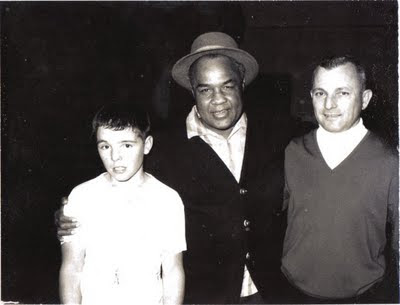 When I heard that Henry Armstrong was in the gym, I couldn't concentrate on my own workout.
He was nearly 53-year-old, and hadn't fought in twenty years.
He was in the gym training a young welterweight, Gary Carr.

My eyes kept looking over to Armstrong as he worked with his fighter.
I wanted to watch closer, maybe pick something up from one of the greatest prizefighters in history.
I was just a kid, but I knew all about Henry Armstrong. I was like a little leaguer standing on the same ball field with Babe Ruth.

How many other world champions held three undisputed world titles simultaniously?
How many champs defended the welterweight title eighteen times (the record) in less than two years (five defenses in a three week period!).
He did the above while also holding and defending the featherweight and Lightweight titles, not to mention a few non-title contests, as well.
Then he fights to a disputed "draw" in an attempt to add the middleweight title to his collection. (He had beaten the middle champ in an earlier match.)

I watched the man closely, this is what I would take from the gym that day.
He looked a little tired, very calm, a warmth about him. His dark sweater had holes in the sleeves, the soles of his shoes were worn.
I imagined how good life had once been for him. Actors Al Jolson and Ruby Keeler had once had held his contract.

My manager, Johnny Flores introduced me to Hammerin' Hank. My grandad snapped a picture. This took place 44 years ago.
When I arrived home from the gym that evening, I tell my younger brother, "I met Superman today!"
He looked at me like I was crazy, "No you didn't," he said.

Yeah little brother, I really did!