The slide show is from the combined photos of Frank Baltazar Sr., Roger Esty, Rodolfo "El Gato" Gonzalez and my photos 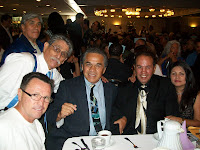 
Thanks to the generosity of my friends, Frank Baltazar Sr and Tom Ray, my wife Jeri and I were able to attend the 2009 California Boxing Hall of Fame. It was an honor to sit and dine with some of boxing's best. Our group consisted of two tables; the Frank Baltazar table; with Frank and Connie and their family, including Frankie Jr. The other table was the James J. Jeffries table which included Rick Farris, Ed Hernandez and his son Patrick, Vince Delgado, Mando Muniz, Bobby Chacon and his friend Rosie and Roger and Maria Esty. The event was held at Stevens Steakhouse in Commerce, California and began at 11:00am with a social and registration hour. A steak dinner was served around noon and the inductions began.

Anyone who thinks award ceremonies are a waste of time, or perhaps a place for big egos to be satisfied and catered to would have been sorely disappointed. Instead some of the humblest, nicest guys you would want to meet were given well deserved awards. There was a lot of emotion on display Saturday by men who were both proud and humbled to be receiving recognition for a lifetime of work and passion in the sport that they love.

An entry in to the Hall of Fame is more than just another award, it is validation, and justifies who you believe you are, it says to your family and friends and anyone that cared to listen that "I am who I said I was, and I did what I said I did". Several of the guys that were honored had their families there, some from out of state, many of them were driven to tears, or talked in whispers lest they start crying out loud, especially when their families stood up and cheered. Validation! When they left the dais they stood just a little taller, had a little more bounce in their steps. It did my heart good just to watch them as they went back to their seats to rejoin there families.That same pride was evident in the table next to ours as the daughters and nieces of  Bob Fuente and Tony Fuentes cheered when their father and uncle were inducted posthumously. .

Seeing guys like Mando Muniz, Bobby Chacon, Danny "Little Red" Lopez, Alex Ramos and Vince Delgado, or younger guys like Roberto Garcia was the highlight of the event for me but the kicker was sitting down and spending time with my friends Frank Baltazar, Rick Farris, Roger Esty and Ed Hernandez and his son Patrick.  For a fight fan this was the place to be last Saturday. It doesn't get any better.

For Michelle Chong's excellent coverage of the event go here


Below is a list of the California Boxing Hall of Fame Honorees:

Congratulations to all the inductees and their families!

In 1957 (and a few years thereafter) I was a Catholic priest assigned to St. Malachy church on 82nd Street in Los Angeles. One of the young men in the parish was named Paul Andrews. Paul was a boxer, who was making a comeback after an injury-caused layoff from boxing. He was a fine young man with great parents. (I was in my late twenties.) I attended all of his fights at the Olympic Auditorium. He lost a great fight with Curley Lee. That was the last fight I saw. I often wondered what happened to him. I later left the priesthood and became a probation officer.