Thanks to John Bardelli, I finally have a photo of Mel Epstein to share with you. Mel was my manager/trainer when I was boxing. This photo is from Mel's earlier years, along with his most famous and successful fighter Young Firpo. I am also sharing the letter that John sent me. For those of you that don't know, John Bardelli is the son of  Young Firpo nee Guido Gardelli. 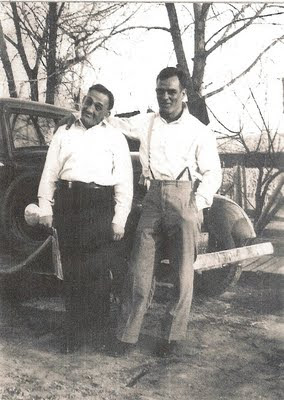 Thanks for your letter. We don't know for sure where this photo was taken but think it might have been taken in Kellogg, Idaho. These were amongst some of "the better days" which existed between Firp and Mel even though they carried on with correspondence through the exchange of letters well into the 1960s. I wish I could pinpoint what fight Firp had just been in ... it appears that they are both in a good and jovial mood ... leading me to believe that Firp crushed someone although there is evidence on his face that he caught some shots as well.

Years later, a fire storm of some sort ensued between them --- Firp, in a rage, took all the collected letters and threw them in the fire destroying great historical letters. Whatever might have happened to the letters Dad wrote Mel --- well, they might still exist as Firp was a prolific writer, I assure you. Whoever might be the recipient of those valuable letters is heir to a real treasure trove. Firp's letters --- and he wrote to many --- including letters to the editor on various subjects, history, environment, politics, religion, mining, prospecting, boxing, --- his own career --- were fact based --- philosophical in nature --- loaded with concepts of spiritual thought --- and above all espoused a deep and abiding belief that God was found in and part of nature.

He introduced his children, Cleo, Fred, and John, as well as his wife and our mother, Mary, to the concept of finding God in, about, through, and as Mother Nature, long before we were introduced to similar concepts through the writings of the Psalms and David, Thoreau, Emerson, Hopkins, Blake, Shakespeare, Wordsworth, Mills, Muir, Leopold, Wood, Carson, Frost, Krutch --- and so many others whose pens have captured imagery and imagination blessing my own personal love of literature and hours and days spent with an author as my friend.

But none of these literary giants brought to me the visual blessings of the enlightening all my God given senses --- of seeing the sheer athleticism and grace of Firp surrounded by the grandeur of nature --- whether he was wading a creek, climbing a mountain, brushing a trail, dropping a seasoned tamarack and, thereafter, reverently manhandling the fruits of his labor, --- he always had an aroma about him of the freshness of nature --- whether picked up from turning over fresh soil in the garden with a shovel or the aroma of firs and pines blessing him as he wandered through the woods, those ardent smells are with me this very hour.

Then, too, to visually see the ease employed with the mastery of strength reduced to least movement --- never wasting precious energy while digging ditches with a pick and shovel that would leave an observer or passerby to marvel and literally question whether a machine was tossing dirt from the ditch --- stories that stagger the imagination but which are true and still verifiable because there are still some who relate what they heard and saw, firsthand, of his laboring ethic beyond what he accomplished as a fighter blessed with unparalleled and prodigious strength --- and the reflexes of a tiger.

Sadly, the letters stopped coming and aside from Mel speaking with me and asking me to convey short messages to Dad during a number of telephone conversations I had with him --- as far as I knew they never exchanged words again. Mel, during a number of conversations which I was blessed to have with him before he passed on in 1980, spoke to me of Firp's exploits in, and his identification and affinity with the environment and the wilderness ... mainly, his love of the mountains.

If you detect a particular sadness, herein, --- no, there is no lamenting --- despite the fact that I always considered Firp my best friend --- and the skills he left me with in tackling any problem in life --- were and are prodigious --- to me this very moment --- and the fount from where the solution arises was for him and all his family based on a love of God --- and the fact that we work for God and not ourselves. Amazing saga.

I thank Rick Farris every day of my life for the vision he had concerning Young Firpo's greatness, once validated --- much like your own, Randy, --- a vision instilled by Mel Epstein who not only knew greatness when he saw it --- but lived it --- contributed to it --- and allowed it to become a teacher and motivational tool, in Mel's own right, as he sought to instill, motivate, and pack some of that greatness into others who sought careers as professional fighters --- Rick Farris and Randy De La O, included.

Rick Farris became a believer --- and his vision was thereafter set --- when George Parnasus and Jimmy McLarnin validated all that Mel Epstein had been preaching --- to countless fighters down through the years after Firp's career ended in 1937 --- preaching what so many thought were only the rantings and ravings equivalent to those of a Burgess Meredith as Mickey in Stallone's epic Rocky --- as Meredith sought to motivate Rocky. And, but for that chance meeting between Rick Farris, George Parnasus, and Jimmy McLarnin, --- youth confronting age --- and youth emboldened to ask, "Just how good was this Young Firpo?" --- perhaps, none of this would have come to pass.

In short order, Rick Farris got an earful from Parnasus and McLarnin which, then, in turn, rocked him and gave him a new found respect for Mel Epstein's veracity. In addition, Rick carried with him for the next 35 years the seeds and a spark which would lead him to draw on the sustenance of Mel Epstein having inculcated into him a sense of what greatness was all about, with the end result being was that he was the one individual responsible for the induction of Young Firpo, born Guido Bardelli, into the World Boxing Hall of Fame.

How ironic is it, indeed, that Mickey sought the wisdom and the particular nuances and idiosyncrasies of a fight manager from the genuine Mel Epstein who --- if the truth be known --- trained and managed one greater fighter and character than the fictional Rocky, --- real drama v. fiction and the real drama was stranger and more unique than the what Stallone captured on celluloid. Rocky Balboa was given birth through some small but meaningful contribution from Mel Epstein --- none could have contributed in the manner that Meredith captured the old-time fight trainer-manager. I wish I could have heard what Epstein might have said to Mickey. This is pure genius --- and how did he learn to do this --- YouTube - My favorite Rocky clip And when I see this clip --- I think of Rick and Randy, heirs to an era that they could not fathom at that moment in time.

Thanks for listening to my own personal thoughts.

Have you ever heard of a boxer called johnny Ray nee John Raymond Hebert born c. 1907 in CT or upstate NY? I heard he was also called the young Firpo.