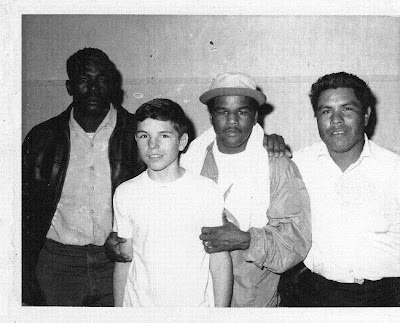 Bobby Bell, Rick Farris, Dwight Hawkins & Manny Diaz. 1967 - Victoria Hall, L.A. These were my three amateur boxing coaches. I always did well with Dwight Hawkins in my corner. On this night, I stopped a boxer who fought out of the Jerry Moore/Henry Blouin stable.

We were all kids once. Some of us were lucky to have good parents, who were strong enough to put us on the right track. Sometimes we strayed, discovered that all the bad things they say would happen if we screwed up, actually would happen. Some of us like to push the envelope, learn the hard way, and such behavior takes a toll. One bad kid can sure do a lot of damage, and it has a ripple effect.

Sometimes home is not a happy place, and we have nobody to tell us what to do, or how to do it. Somebody will.
Hopefully that somebody is the right person, more often than not it's the wrong person. I knew a lot of kids in similar situations when I started boxing, just kids who'd wander off the street and make their way back to the gym behind manager Johnny Flores' garage in Pacoima.

Sometimes they were loaded, like this kid about my age who showed up with two buddies one evening in early 1967. He was loaded. His two buddies stood silent in the corner, as the kid told Johnny Flores that he could fight, and wanted to fight that night. He pointed to me, as I shadowboxed in the ring. "I want to fight him." the kid announced. We were about the same size, same age.

Flores smiled, he turned to me and winked, then turned back to the kid. "You want to box Ricky? OK."
The kid loooked at his friends and smiled big, the friends smiled back. They wanted to see their buddy kick some ass.
We didn't wear headgear, but Flores made the kid wear a mouthpiece. My trainer, Manny Diaz smiled when he put the mouthpiece in the kid's mouth. "You have to wear this, he'll knock your teeth out," I heard .

This was not a first. This happened once in awhile at Johnny's. I'd kicked a couple kid's asses, and my stablemates had too. Johnny never denied a young man a chance to realize his dream, and if trading blows with his boxers was their dream, he'd grant their wish. In the 60's, liability wasn't an issue, and you still could find men sporting a pair of balls.
When men were taught a lesson, they didn't have legal recourse, they just learned a valuable life lesson.

The kid who came in stoned with his buddies got his ass kicked that day. But he was tough, he didn't quit, his body just could not continue. He promised he'd be back the next day, he didn't show. However, about six months later he did show up. This time he came with a trainer, and his hair was cut. He was smiling, confident and clear. He and I would box again, and he had learned a few things during the months since we last slugged it out. His trainer was a good one. We would continue to box off and on, on occasion, many times over the next eight years. He did pretty well for himself, won a couple world titles, and became an L.A. legend. His name is Bobby Chacon.

Like me, Bobby Chacon found a safe haven in a boxing gym. We found a place where we belonged. I was lucky, several men such as Johnny Flores, Bobby Bell, Manny Diaz and Dwight Hawkins provided a solid example. I had great parents, my dad and I would bump heads a lot, my grandfather made it possible for me to box. That saved me. It doesn't matter how much opportunity a person appears to have, it all comes down to influence and choice. A fine line often seperates the best from the worst in life.

I don't know what motivated this thought. Maybe these photos are taking me back. I have a story I want to share with you guys. It's about my heavyweight stablemate, my best buddy. No, it wasn't Jerry Quarry, but our stablemate that was Quarry's sparring partner for the Mathis, Frazier & Chuvalo fights at the Garden. His story is better than Quarry's. Maybe next time?
By Randy De La O at December 24, 2009