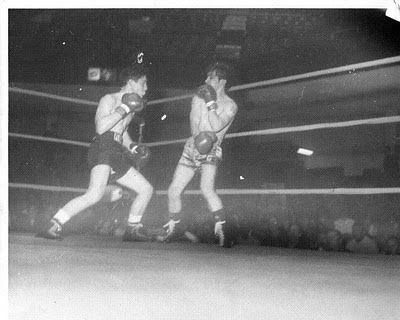 
Randy: Classic Photo! This is what "Classic American West Coast Boxing" is all about. Rick, I know you landed that right hand. Looks like a beautiful shot!

I see you fought Gutierrez three times as a pro. The first was a loss, not content with that you fought to a draw in the second and in the third fight you got the win. That's determination. I admire that. That's a fighter.

Rick: Thank you, Randy. I actually fought Gabe Gutierrez six times in an 18-month period.
I fought him three times as a 17-year-old amateur (the photo is from our last bout, he was 23-years-old).
He won the first amateur bout at the Olympic, we drew the second time, and I won the last (the bout pictured) for a Diamond Belt title.
We both turn pro a few months later, and again, he wins the first, the second a draw, and I end our series with a win.

The last time we fought I had just turned 19, and had nine pro fights. My body was maturing and I was gaining strength that I had lacked earlier.
I was now too strong for Gutierrez, and I beat him up pretty bad. I wanted to make sure he'd never want to fight me again.
I was tired of seeing him in front of me, I wanted to put and end to it. I also wanted to whip Louie Jauregui's fighter.
By Randy De La O at January 16, 2010

Hello. I trained at the Main Street Gym in the early seventies. Maybe we met, Rick. Sammy Sanders and Larry Parker were my trainers, and Duke Holloway helped a lot. I fought in that 1970 Diamond Belt Tourney, losing to Fernando Gil, welterwight division, novice, on 2-9. It was my first fight, and I continued, but never turned pro (hurt my hands badly against Carlos Lopez in 1972). It was great in those days at the gym. I knew Howie, of course, and others.