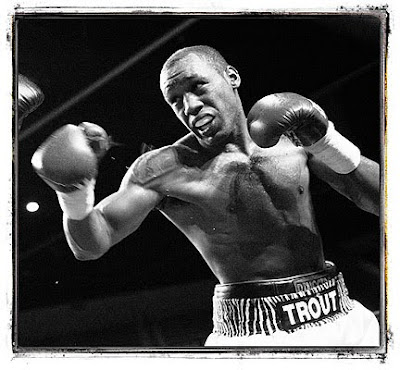 After a long, slow five-year climb barely out of the club level, Trout has not only found his name ranked among the world’s best, but just one notch below world championship honors.

The new year – and the WBA – have been good to Trout, for one morning, early this year, the undefeated, former amateur star from Las Cruces, N.M. discovered he was ranked No. 1 in the world at 154 pounds.

“I was surprised,” admits Trout. “A year ago, I thought I had a few more years to go. I knew I was getting close to the spotlight, but not this close.”

The crafty, 24-year-old southpaw gained entry into the WBA’s ratings mill last March, when he picked up the organization’s Continental Americas belt, stopping Juarez sub Martin Avila in four. After two lopsided decisions over journeymen, Trout was matched up with WBA No. 7 Contender Nilson Tapia, then 11-1. After a tough fight, Trout picked up another minor WBA belt – and a No. 2 ranking.

“Nilsen was my toughest fight,” admits Trout. “I thought I won eight of the 11 rounds, but I took some good shots. It showed me what I can take, and what I can do. I’d been waiting for a fight like that.”

The move to No. 1, up from No. 2, came after Japan’s Nobuhiro Ishida (22-5-2, 7 KOs) claimed the interim version of the WBA’s 154-pound title by defeating Oney Valdez (19-10-1, 13 KOs) on Dec. 29. Ishida slid into interim status under Yuri Foreman (28-0, 8 KOs), who’d beaten Daniel Santos (32-4-1, 23 KOs) in November and the names were reassembled: Trout hopped past No. 2 to No. 1, becoming the mandatory challenger for the interim challenger, who became the mandatory challenger for the “real” champ, that, being Foreman, who is most likely going to fight Miguel Cotto in June. Foreman’s possible match-up with Cotto has created a domino effect waiting game for the contenders hoping for a title shot. 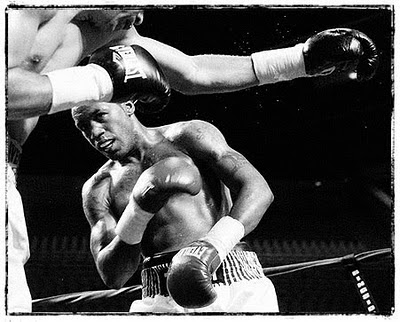 Trout, managed by Bob Spagnola and trained by Louie Burke, hopes to get a shot at the interim champ, and says negotiations have already begun. Having just fought, however, Ishida may not be ready until the spring.

“Things are happening so fast, so I can’t be caught with my pants down,” says Trout, who stays in the gym year round. “Fighting Ishida means probably going to Japan – which I don’t mind. I just have to take it out of the judges’ hands.

“If given the choice, I’d rather fight Cotto than Foreman, so I’m hoping he wins. Foreman has good footwork and Cotto will be easier – he stands right there in front of you and will let me bang him up.”

The even bigger danger, says Trout, is not Ishida, Foreman or Cotto – it’s getting rusty. On the other hand, fighting means risking a loss or injury – and a shot at a title, interim or otherwise.

“We’re not gonna just sit around,” says Trout. “We’re hoping to get a tune-up in the meantime. We’re hoping to clean up our backyard. The bigger risk is in not fighting.”

“Elco would be a nice tune-up until I get a championship opportunity,” says Trout. “There are a few others, too.”

“I’m not dissing any one of them,” says Trout. “But this is a business and staying busy means keeping sharp.”

If Trout had it his way, it’d be Garcia as a tune-up, Ishida for the interim belt, and the winner of Foreman-Cotto for the real belt.

There’s one other fighter Trout feels he is destined to fight again sometime in the future: Vanes Matirosyan.

The last man to beat Trout was Matirosyan, having last met at the 2004 Olympic box-offs. After years of grooming by one of the top promoters in the world, Top Rank, Martirosyan, after meeting much harder competition than his former nemesis, has risen slowly on the ladder of contention, but is looking at a title shot this year.

Martirosyan, coming off a hard-fought win on Fox Sports En Espanol last week, is rated in two of the four major ABCs top ten, from No. 7 (WBC) to No. 8 (IBF), though his last win – a hard-fought decision over former champ Kassim Ouma – should move him into the top 5.

Trout was not only unimpressed with Martirosyan’s win, but hopes his path will cross again with the last man to beat him.

“Vanes is tough, but he’s not the smartest fighter,” says Trout. “I’d outsmart him.

“He stopped me from accomplishing my dream to be an Olympic champion. It was his fault . . . but I’m not holding a grudge. I’m using his win over me to fuel my fire. If we fight again – this time as pros – they’ll be no stopping me from my dream now, to be a world champion.”

Trout says the pressure is suddenly on him, but he’s right where he wants to be.

“We figure, we’ve been put in the right spot, now it’s time to perform,” says Trout, who wants nothing but name contenders from here on out – minus the aforementioned tune-up.

“Too soon for me? I don’t think so. I’m going to get the chance to be a real champ. This just means I’ll be able to fight as a champion longer, and to lock down my legacy.”
By Randy De La O at January 21, 2010