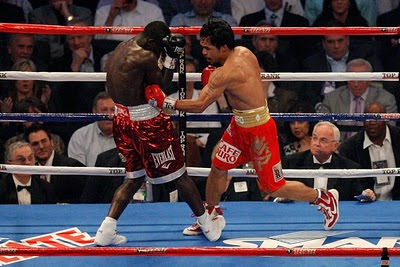 ARLINGTON, TX - MARCH 13: (R-L) Manny Pacquiao of the Philippines throws a left to the body of Joshua Clottey of Ghana during the WBO welterweight title fight at Cowboys Stadium on March 13, 2010 in Arlington, Texas. Pacquiao defeated Clottey by unanimous decision. (Photo by Tom Pennington/Getty Images)


Starting today and for the rest of his life Joshua Clottey will be asking himself “Why didn‘t I? Why didn’t I listen to my corner man. Why didn’t I get mad? Why didn’t I throw more punches? Why didn’t I even Friggin try? He will relive the moment and create scenarios where he actually fights back and then he will open his eyes and finds that nothing has changed. As is usually the case in boxing he will find that he has no one to blame but himself. Oh, he might try. He’ll fire this guy or that guy but still, but nothing will have changed. It will always come down to this: Clottey never took a risk, never took a chance on victory, and therein lies the rub-you have to actually throw punches to win a fight.

The most frustrating thing about Saturday night’s fight between Manny Pacquiao and Joshua Clottey is that he was actually capable of winning this fight and if not win, at least capable of making a great fight. It comes down to this: It’s not that he couldn’t he just wouldn’t. I hope he can live with that.

I think I am finally prepared to place Manny Pacquiao within the Pantheon of Boxing’s greats. He deserves to be mentioned with Boxing’s greatests: with the Duran’s, the Chavez’, the Armstrong’s, the Sugars, both Robinson and Leonard. He truly is a phenomenal fighter. He is a timeless warrior and could have fought in any era. If that wasn’t plain for me to see before it is plainly visible to me today.

Pacquiao had before him a legitimately strong welterweight and a worthy challenger. A former champion that was still in the mix. Pacquiao reduced him to a man willing just to survive. Clottey had a tight defense, a sort of peek-a-boo, middle of the ring rope-a-dope. It took Manny a few rounds to figure him out. When he did he turned on the Pacquiao machine and went to work on Clottey’s body, finding the right angle and landing the right hand just below the rib cage. As Teddy Atlas likes to say “he was collecting interest, he was making an investment in his future” . Pacquiao never stopped throwing punches and while Clottey did have a few moments where he could actually break through Pacquiao’s defense, he was just too timid or overwhelmed, by the amount of punches being thrown at him.

The fight was a great showcase for Pacquiao in everyway. It was a chance to see a Zen Master at work. That alone was (more or less) worth the money, but it was not a great fight. For that you need two willing participants. My hope? My hope is that on May 1 of this year Sugar Shane Mosley knocks out Floyd Mayweather Jr in spectacular fashion thereby setting up a fight with Manny Pacquiao. Manny and Shane are cut from the same cloth. What stirs these two warriors is not the money. It’s the love of the game and that’s where true greatness lies.


Highlights of the Pacquiao vs Clottey fight
By Randy De La O at March 14, 2010