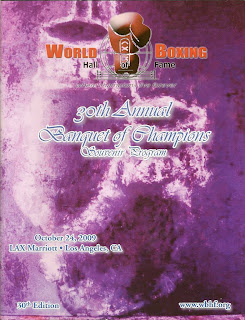 
Last October, I stepped up to the stage with WBHOF President, Armando Muniz.
It was the 30th annual WBHOF Banquet of Champions, and Mando and I were going to honor an L.A. boxing legend, Frank Baltazar.
I'd be up there three times that night, but this was the award I most looked forward to.

As I stepped up to the platform my eyes drifted to the WBHOF banner, which was mounted on the wall behind the podium.
"Where Champions Live For Ever", is the slogan on the WBHOF logo. I smiled inside, "Yes, from now on we'll honor them properly."

That was a goal, and the first thing that needed addressing was the event program, and the ballot.
Both had been published with innacurate spelling and typos in both common words and legendary names.
For years, nobody did a thing about it. I was amazed. Even more amazing was the program, which is archived in both State and Federal museums.

When I joined the group, I told them I had historical knowledge, and the contacts to find out anything I did not know.
In 2007, the year Dan Hanley and I began interviewing legends on camera, I noticed something was off when looking over the honor roll.
Jimmy Lennon Jr.'s name was listed as an inductee in the "Announcers & Broadcasters" catagory. However, there was no Jimmy Lennon Sr.
No cut on Jimmy Jr., but his Dad is a true legend, one of the greatest ring announcers ever. I knew the old man was in, but where was he?

I then noticed Jack Blackburn (Louis' trainer) was in, but as "Mack" Blackburn. Where was Charlie Goldman (The Rock's trainer)? Teddy Hayes (Dempsey's trainer)? And how come Tommy Burns was inducted twice, the 2nd time seven years after the first? I learned that after a legend was inducted, nobody paid close attention to maintaining the "honor roll". Jake Shagrue was another missing trainer, and the list goes on. Almost three dozen WBHOF inductees, from several catagories, were not listed in the program.

I made some noise. Nobody could hear me however, because the Vice President at the time was too busy shouting.
They were trying to figure out why tens of thousands of dollars was missing. It seems the treasurer had gotten confused.
How am I going to fix the problem with all the noise and commotion that took place at the board meetings?
The 2008 program was the same rag as always, and nobody cared. These guys didn't know boxing, they were fans at best.
Well, a few of them were ousted, and I went to work with the help of some "silent" historians.
These men wished to remain anonymous, but one was not only an L.A. boxing legend in his own right, but a former WBHOF director.
He knew the organization better than those running it today.
I dug up names, and they added to those names with documentation, such as ancient programs that had accurate lists.

With the help of Dan Hanley & John Bardelli (who re-edted my editing), we were able to put out the first historically correct WBHOF Program in many years.
The 2009 edition (The 30th year) reflected the grammar and spelling of a former English teacher/Attorney (Bardelli), the cover was graced by a Roger Esty original abstract painting, and although no major names joined the Honor Roll last year in the boxer catagory, in the post humous boxer catagory, the first black world champ in history, George Dixon, was finally honored nearly a century after his death. Ad Wolgast was reunited with Barbados Joe Walcott as they re-joined other legends that had also been inducted years ago, yet dropped off the list. I must credit Tom Ray for putting me on the trail of this mystery. Tom is a true historian, he has been a part of boxing in the ring, not just libraries. And there was Randy De La O, who put together a brilliant collage of photos, and created the greatest production covering the WBHOF event on YouTube.

I personally felt proud to have our friend, Chuck Johnston (A real boxing historian), join us at our table. All of these things were going thru my mind as I took the stage.

"Where Champions Live Forever." I was kinda proud of those words, and felt our group had contributed to this in 2009.
The ballot was the only embarrassing element related to the 2009 event. I should have paid more attention to it before it went out.
I was focusing on finding the missing legends and when I first saw the ballot I was speechless. Now I really had to make the program correct.
Mando and I agreed to change the printer for the 2010 ballot, and to allow myself, Dan Hanley and John Bardelli "proof read" it before it was printed and mailed.
The printer was not changed, I guess he was a personal friend of somebody. The copy was not forwarded to be edited.
It was decided that an inaccurate ballot mailed on time, was better than waiting a couple days for editing. So to Hell with history.

When boxers are not accuratley represented, how can people remember them? To be forgotten or disrespected is when a legend truly dies.
My idea of a World Boxing Hall of Fame is a celebration, not a funeral.
I want to thank everybody here who has contributed to the WBHOF by assisting me in attempting to make things right.
By Randy De La O at March 27, 2010