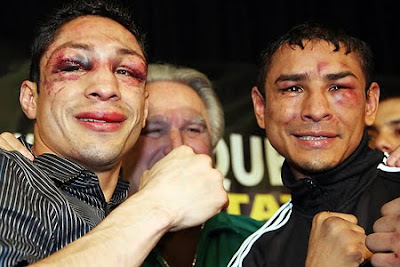 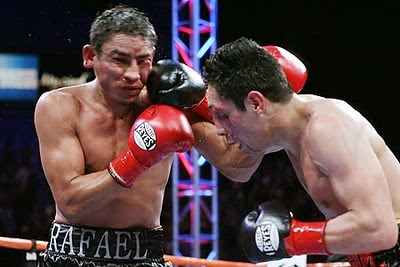 
Personally, I would rather  see these two phenomenal fighters skip the fourth fight. They’ve already done enough damage to each other. However, I’m not going to miss this one. Both guys have fought only once since their last meeting at the Home Depot Center in Carson, California on March 1, 2008. Marquez scored a 3rd round KO of Jose Francisco Mendoza of Columbia at the Arena Monterrey in Monterrey, Mexico. Vazquez, for his part stopped Angel Antonio Priolo of Columbia at the Nokia Center in Downtown Los Angeles on October 10, 2009 .

Marquez and Vazquez might not get the attention that Manny Pacquiao or Floyd Mayweather Jr get, or any number of elite fighters but to those that know boxing these two are the cream of the crop. No over blown entrances, no bullshit surrounding the fight, no embarrassment to the sport, just pure fighting in the ring. The way it was meant to be.

I was at their last fight. If the fourth fight is half as good as the last three fights it will be twice as good as the crap we have been fed lately. That being said, like the rest of you, I fear for their safety. A fourth fight just can't be good for their health! Speaking of Manny and Floyd, they should, take a look at Rafael and Israel this weekend and take notes. This is what real championship boxing is all about. This is the ultimate in risk taking,. Come to think about it, this is real Ultimate Fighting!
By Randy De La O at May 21, 2010

Israel Vazquez has nothing to be ashamed of-and I hope both guys get the Congressional Medal of Honor.

hi, you have nice blog.. u can view also mine..http://akoniwares.blogspot.com