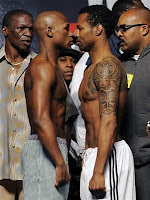 There is something about two great fighters, at any weight, stepping into the ring to face each other that no other sport can capture. The weeks leading up to fight with two greats are filled with rumors and controversy but most fighters will just shrug it off and keep on training. The anticipation to a real fight fan becomes almost unbearable. You have your favorite, maybe you’ll place a bet or two, you’re convinced that your guy will win. Yet in your heart of heart, you really don’t know, at best you can only hope. You can’t step in the ring and fight their fight for them. It’s something a fighter must do on his own.

Sitting ringside or in front of your television, watching the fighters enter the ring, the excitement starts to build to a crescendo . The crowd begins to roar and as the fighters meet in the middle of the ring for the instructions from the referee electricity fills the air. If you’re sitting next to someone, you look at each other, hopefully, rubbing your fist together nervously in anticipation. It’s only a few seconds now and the bell sounds and the fighters leave their corner and meet in the ring. Those few seconds before they reach each other are what fight fans live for. Two great fighters meeting, two worthy champions squaring off and suddenly the fight begins.

This is the way it was when Alexis Arguello faced Aaron Pryor or when Muhammad Ali faced Joe Frazier for their first fight, aptly called the Fight of the Century. I was in a room full of people watching the Duran-Leonard fight in 1980 with my father. At times there was screaming, at others, you could have heard a pin drop. Some fights actually live up to the hype.

Tonight Sugar Shane Mosley and Floyd Mayweather Jr. will meet at the MGM Grand in Las Vegas in what has the potential to be a great fight. I have my favorite to be sure but above and beyond that I want to see a great fight. Maybe “Money” Mayweather will finally live up to all the hype and bravado and produce a great fight or maybe Sugar will, once and for all, prove to be as sweet as Robinson and Leonard. Is that too much to hope for?
By Randy De La O at May 01, 2010