Danny Lopez Inducted into the International Boxing Hall of Fame 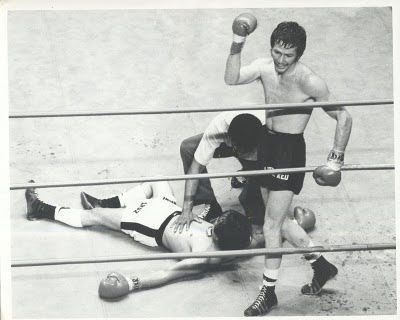 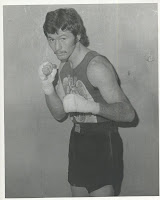 Congratulations to former featherweight champ Danny “Little Red” Lopez for his long overdue induction into the International Boxing Hall of Fame in Canastota, New York, this past weekend.

Originally from Utah, Lopez made his home in Los Angeles after following his older brother, Ernie “Indian Red” Lopez. to Southern California.  West Coast boxing fans took to his exciting, take no prisoners style of boxing. In 1974, despite his loss by 9th round knockout, his fight with cross town rival and equally popular Bobby Chacon at Los Angeles’ famed Olympic Auditorium made him one of Los Angeles favorite fighter.

His career seemed in jeopardy for a short time following his loss to Chacon. He had two back to back losses, the first was to  Shig Fukuyama in September of 1974 when he was stopped  in the 9th round .The following year, in January of 1975 he dropped a decision to Octavio Gomez in their ten round bout. He would rebound from those losses and run up a string of victories, including a K.O. win over Gomez in a rematch at the Forum in 1976.

Lopez was never in a dull fight and the saying was that Lopez wasn’t happy until he was knocked down. If you knocked Lopez down you  knew you were in for the fight of your life. “Little Red” was a warrior and left nothing in the ring.

With K.O. wins over Chucho Castillo (2nd round ),  Ruben Olivares (7th round), Sean O’Grady (4th round),  Octavio Gomez (3rd round) and Art Hafey (7th round)  Lopez was ready to fight for the title, going to Accra, Ghana, Africa to fight for the WBC Featherweight Championship. The fight took place at the Accra Sports Stadium on November 6, 1976.  Danny didn’t disappoint. He won a 15round decision,  Kotey was knocked down in the 11th round. In their rematch in 1978 Lopez made quick work of Kotey by stopping him in the 6th round.

Danny made several exciting defenses of his title, including an exciting 1979 Ring magazine "Fight of the Year" with Mike Ayala of San Antonio, Texas. On February 2, 1980 Danny was matched against a relatively unknown fighter  from Mexico by the name of Salvador Sanchez. Though fighting valiantly against a fighter who would prove to be an all time great, Danny was fighting an uphill battle. Danny was stopped in the 13th round. For Lopez’ fan this was hard to accept. It was even harder for Danny and a rematch was set for June of that year. This time Danny made it to the14th round but the end result was the same.

Danny retired after the second Sanchez fight. He came back in 1992 getting stopped in 2 by Jorge Rodriguez  in Irvine, California. Danny “Little Red”  Lopez had a great career and whenever Los Angeles  boxing fans speak of L.A,’s favorite warriors his name is always at the top of the list. He gave his fans the best he had and no one could ask for more.
By Randy De La O at June 13, 2010

At any rate, with Danny, it's "Better late than never"