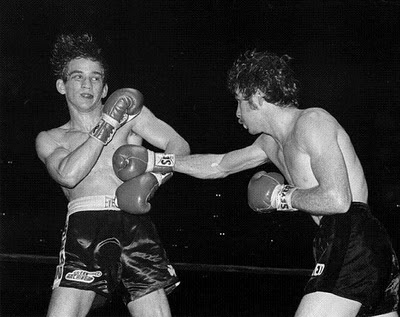 It was a day or two before he fought Danny Lopez, when Sean O’Grady and his father Pat walked into the Main Street Gym in Downtown Los Angeles. I was working out that day,. I didn’t give any thought one way or the other to Sean or his father. They were just two more guys in an already crowded gym. A few minutes later I saw my trainer Mel Epstein talking with Sean’s father Pat. Seems like Mel knew everybody . They spoke for a few minutes and then Mel walked over to me and explained who both of them were. Sean was fighting Danny Lopez in a 10 round bout at the Forum. Mel looked around and then said to me with some empathy, "Danny's, gonna hurt him".

Mel said they came to the gym and forgot to bring a towel. Mel knew I always brought two towels to the gym, one to wipe the sweat off of me during the workout and the other to dry off after my shower. He, more or less, volunteered my towel. I didn’t mind really but it meant that I would have to dry off with my “sweaty’ towel. I was done working out and showered and then I went to hang out with Mel and some of the other guys at the gym. I was also waiting for Sean to finish up with my towel. It was my mother’s towel really so I didn’t want to leave without it.

So I waited a while but I somehow lost track of Sean and my towel. I asked Mel “Where’s the guy with my towel?” “They left a minute ago”. “With my towel?” I ran out the double doors and caught up with them. I said to Mr. O’Grady “You have my towel!” He couldn’t have been more apologetic, both of them were. As hectic as things must have been for them, I knew it was an honest mistake ,still, I wasn’t about to go home without my mother’s towel. There is a picture floating around that was originally published in, either the Los Angeles Times or the Herald Examiner, that shows Sean with a towel slung over his shoulder. That was my mother's towel.

A few nights later Sean was stopped by Danny. The records say that “O'Grady's corner stopped the bout after the 4th round.”. That fight says nothing about Sean O’Grady and it says a lot. Sean was, if my memory serves me right, 17 years old when he fought Lopez. That fact says more than anything else. That took some stones. 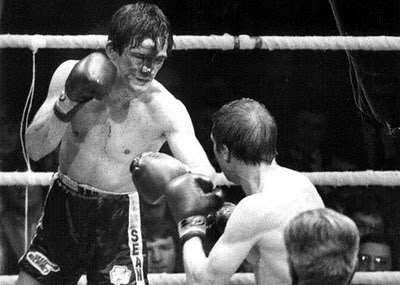 Sean O'Grady vs Jim Watt
O’Grady would not lose again until November 1, 1980 when his fight with the ever tough Scot, WBC Champion Jim Watt, in Scotland, was stopped due to cuts in the 12th round of a scheduled fifteen round fight. He had one more fight, against Jose Cabrera, winning a unanimous 10 round decision.

Sean O’Grady will be inducted into the California Boxing Hall of Fame this weekend. He’s well deserving of the award. His former corner man and trainer Tom Ray will be accepting the award in his stead.

Our congratulations to Sean O’Grady!

Great story with a much happier ending than my "mutha" story;she
threw out my baseball cards-including a 1952 Mickey Mantle card,which was worth...sumpthin'..worse-she threw out my Tony Conigliaro bat.Conigliaro went 0 for four,I was sitting with my dad behind the Red Sox dugout at Tiger Stadium and Conigliaro rolled his bat across the top of the dugout;I think he hit two home runs the next day.I still can't believe she did that.The last time I remember
seeing O'Grady fight was getting stopped by Andy Ganigan,who sadly
apparently was mugged in Hawaii a few months ago-and has permanent brain damage.

I feel your pain, when I was in the Navy,my mother threw away Superman #2, Batman #49 and about two dozen other Golden Age comics. That might have been my retirement fund. Mother's can be funny sometime.

Ganigan was a hard puncher but Arguello cleaned his clock.

Oh, and sorry to hear about Ganigan's injuries. I hope they caught the guys.

well I read a little about what you provided about the hard boxing you did and the turf wars on the walk in L.A. I heard of a lot of the guys you mentioned which helped me understand how stardome works and how bad guys finish on top (some of my guys and problems were in there, 74, 77) wow man you told us what happened. I have always heard of Cusdamato and Philedelphia the Rocky movie stuff was interesting I always wondered what Sylvester was doing in Mazatlan and L.A.. I wanted to add my 2 cents about Ali and Liston well my Grandmother and Aunt her elder sister they came here to Berkeley and a bunch of their first cousins went to L.A.. But it gets even better when you mentioned the cross town rivals and battle I understood about the Chacons and even De LaHoya I saw him as a boy he was a visitor to my other families neighborhood near downtown Oakland. I moved on and now where I live I have been known to see people that resemble Roberto Duran. P.S. you guys did a great job on those Camocho fights that was something I admired when I was introduced to boxing. Alexis was my nemisis in Oakland. He really betrayed us with the help of others like Holmes who doesnt care too much for our experience in America and the U.S.. We don't like Rico because he made it to L.A. in the 70's too and it didnt work out. I'm only 37. God Bless You.