Photo by by Emily Harney and courtesy of Fightnews.com 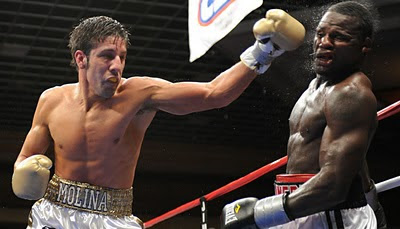 
It’s very rare that I really want to see a fighter literally get his ass kicked really good in the ring. Usually my feelings are-Let the best man win. However, every once in while a fighter comes along just begging for it. Watching them “get it” can be a very satisfying experience. That was the case last Friday when John Molina of Covina, California met Henry Lundy of Philadelphia, Pennsylvania  in a scheduled 12 round fight for the WBO NABO Lightweight title, at the Twin River Event Center in Lincoln, Rhode island.

Prior to the fight Lundy called Molina a “Dumb Fighter”. That was a pretty low blow thrown at a guy that seems to have plenty of respect for his opponents. That remark didn’t set right with me. Thrash talking is one thing but this was personal. Before the fight Lundy had this to say  “I’d like to thank ESPN for showcasing my talents again. There were fireworks on July 4th and there will be even more tomorrow night. You can teach fighters how to fight but, if  you don’t have heart, you don’t have it. Anybody who knows Hank Lundy knows I’ll fight anybody. Training in Philadelphia I’ve fought everything including elephants and lions.” Considering how the fight played out that statement wasn’t too bright.

Lundy started out quick against and was able to find his range against Molina. Molina, who possess a good jab when he uses it,  decided to fight Lundy’s fight. Lundy did a fair job but not quite as good, in my opinion as commentator Teddy Atlas thought. Still, up to the seventh round Lundy won most of the rounds.  Molina, who proved to be a game fighter, weathered the storm, still looking to turn the fight around. It came in the eighth round when he landed a fire cracker right hand that caught the cocky Lundy moving to the side with his hands held low, knocking Lundy down

Lundy seemed to be pissed that the ref ruled it a knock down. He mouthed the word “What? To the ref and shook his head in disgust. His expression said it all. He seemed to be saying “You’re calling it a knock down just because he landed a right hand and  I hit the floor? I know how he feels, I thought Roberto Duran was robbed when his fight with Tommy Hearns was stopped just because Hearns knocked him out.  I mean, where’s the justice.

Lundy survived the eighth and ninth round doing his best Pernell Whitaker imitation by turning his back and running. He threw a strange behind his back punch and was warned by the ref.  He seemed to be  fighting scared from that point on and Molina assumed control of the fight.  Referee Ricky Gonzalez stopped the fight at 2:18 of the eleventh round after Lundy was unable or unwilling to answer a barrage of punches thrown by Molina.  Lundy seemed upset by the whole affair. It has to be hard losing to a “Dumb Fighter”

I have no idea how far Molina will go in his career. He seemed to learn a few things from his loss last year to Martin Honorio. Maybe in time he will prove to be top flight championship material. Friday night he proved that between he and Lundy, he was the one that had the right stuff inside, the bigger heart. That makes him the kind of fighter I like to root for.
By Randy De La O at July 11, 2010

I know this cat spank Lundy and he is the cockiest roach you could meet. I'm glad a classy fighter like Molina took home the victory that night. Spank Lundy deserve the ass-whooping because he is a low life and everybody who also know him will say the same.

We all know it was a lucky punch thrown in disperation. Stop the name calling such as, describing white fighters classy verses cock roach and any other negative term used to demean black fighters. It makes no sense. Fighters use any method they can think of to get into their opponent’s head. We seem to be okay with it as long as the opponent isn’t white.

The punch thrown in desperation by Molina only connected because Lundy started show-boating. Lundy got caught because he took his opponent for granted. Hopefully he learned his lesson. We cannot deny that Lundy was the leading on all cards up until when the fight was stopped. He would have won, even with the knock-down had his corner adviced him not to mix it up until he had recovered.

Watch Charlie Edwards vs Angel Moreno live online from anywhere in the world owing to FastestVPN; without facing any geo-restrictions.