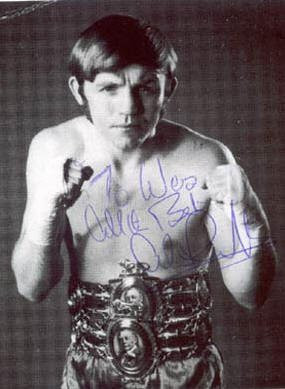 Alan Rudkin, arguably the greatest bantamweight this country has ever produced and very much a forgotten hero, was found dead in a Liverpool street early yesterday morning. He was 68 and his death is not yet explained, and one hopes that the gifted little man, a modest man, was not killed in his beloved home city. Police are awaiting post-mortem results.

Alan did it all in a glittering career that won him British, Commonwealth and European titles and three cracks at the world title in a frightening era for the bantamweight division in the 1960s. Here, he might have won the world title but Alan was forced to travel to challenge Fighting Harada and Lionel Rose, dropping close decisions, and was stopped in two rounds by "Rockabye" Ruben Olivares in Los Angeles in 1969. All three champions were probably unbeatable at the time Rudkin faced them, and Alan was inexperienced when he took Harada the full 15 rounds in Tokyo in 1965.

Fresh-faced and with a mop of sandy hair, Alan looked very much the Beatle in his early career and first caught the eye as an amateur as part of the legendary Great Britain side which whitewashed the USA 10-0 at Wembley in 1961. Unlike Billy Walker, Rudkin was never a big puncher but destroyed many opponents mentally as he took over during the course of a fight, particularly the course of 15-rounders. Rudkin enjoyed 'sussing' his opponent before reacting. He won the British bantamweight title from Belfast great Johnny Caldwell on a rare stoppage in 10 rounds and enjoyed a fierce rivalry with Scottish great Walter McGowan, with whom he shared two 15-round pure boxing classics, and later saw off domestic challengers Evan Armstrong and Johnny Clark (twice). He also cleaned up in Europe.

His last fight with Walworth’s Clark at the Albert Hall in 1972 is arguably the best domestic bantamweight scrap ever seen on these shores, and Rudkin won it to leave the sport on a high and a huge void among the smaller weights in this country.

Sadly, Alan never really found meaning to his life after boxing. He ran pubs but too many idiots wanted to fight him, but he developed an inevitable liking for drink and you wonder why he was out in the early hours of Wednesday, although he was close to his city centre home.

Boxing historian Derek O’Dell saw him on Saturday night at the Shoreditch Town Hall bash, attended by hundreds of fighters who fought at the legendary cockpit arena, including Alan himself, and Alan "seemed a bit quiet" but perked up when he was reunited with Clark. Make no mistake, Alan Rudkin was right out of the boxing textbook, a complete fighter with every shot in the book, good stamina, defence and a brilliant boxing brain.

He is - and always will be - one of our boxing greats. 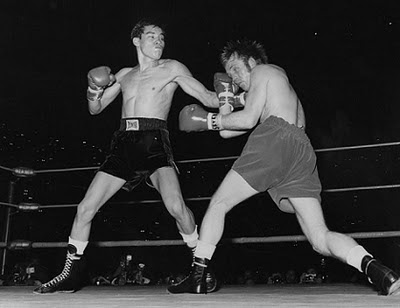 I'm truly saddened to learn of his death. I met Rudkin briefly in 1969, when he came to L.A. to challenge the great Ruben Olivares for the World Bantamweight title. We talked, and I told him I had family in England. I was well aware that he was in for a bad night when he faced Olivares, just as Lionel Rose was a few months earlier when Ruben won the title in the same ring.

In the early sixties, when I began following boxing, I prefered the lower weight classes, especially bantam and featherweights. I was always partial to the great Mexican fighters, but my British bloodline led me to keep an eye on boxers from the U.K. and one of them was Alan Rudkin. I remember reading about Alan in Boxing Illustrated, a big feature story that claimed that Rudkin had been a school mate with a couple of the Beatles. He'd given both Fighting Harada and Lionel Rose a good go in his earlier attempts to win the title. I knew Harada was a great bantam, and Rudkin had done himself and Great Britain proud in his attempt to bring home the 118lb. title.

I remember sitting with my dad at the Forum the night he stepped into the ring with Olivares. The Mexican crowd was just as tough on a challenger as the great talent from below the border. Rudkin entered the ring to the sound of boos. More than 18,000 packed the Forum that night, hundreds had made the journey from below the border to cheer on Olivares, many of the same fans that had rioted the previous year when Rose edged Chucho Castillo in the same ring. The only ones in the house rooting for Alan Rudkin were a small group of British who lived in Southern Cal, but their cheers were drown out by the explosive Mexican crowd. Olivares entered the ring to the sound of Mariachi music, firecracker and cherry bomb explosions and a thunderous ovation.

At the time, Alan Rudkin was at the end of his career, this was his last shot, and he faced overwhelming odds when the bell rang.
About half way thru the opening round, Olivares sent the game Brit to the canvas. In round two, Rudkin was floored twice, the last time for good. I didn't expect much different, in my 17-year-old heart I believed that Ruben Olivares was the most dangerous knockout puncher in boxing and his record supported my belief.

At the time, I was living with my Grandmother, who was born in London nearly 70 years previous. She wasn't a boxing fan, but I had told her I was going to see an English bantam challenge for a world title. I had told her about Rudkin after meeting him at the Alexandria Hotel, where he had trained for the fight. The next morning she asked, "How did the boy from Liverpool do last night?" I told her he didn't last long, but few did against Olivares. At least he made a good paycheck for the evening.

Forty-one years have passed since that night at the Forum, and now I learn that this game English battler has now passed himself. I did not know Alan Rudkin, but our paths crossed briefly. When he came to town to fight for the bantam title, I was well aware of who he was. When we spoke, I liked him and was honored to meet a man I'd read about many times as I grew up in boxing.

Ever since reading Bennie's post on my I-Phone today while working, I've thought about Alan Rudkin.
Rest in peace, champ. You are a part of boxing history. God bless your soul.
By Randy De La O at September 23, 2010

I have re read this a lot of times and it never fails to bring tears to my eyes and a fierce proudness of my lovely Dad Alan Rudkin. Thankyou for sharing your story with us his daughter Becky x

that was a nice tale becky wasnt it xx

What a great fighter your Dad was Becky and what a lovely bloke too. I only ever met him once some years ago at an ex-boxers "do" in Pontins, Ainsdale, Southport. I was there for the week-end and Alan was guest of honour. I used to watch all his fights when I was younger and he was just great - classy real proper boxing skill with a fighting heart. I was a bit too shy to approach Alan since he was always surrounded by a lot of people but on the last day as I was passing his table, I nervously went up in front of his crowd of friends and asked if I could shake his hand and I told him that he was one of my boxing "idols". He shook my hand and asked what brought me to the ex-boxers weekend and I said that my late father was a pro-boxer from Manchester in the fifties so I has always been a boxing fan. Alan asked what my Dad's name was and I replied "Frank Johnson" to which he turned to his mates and said " this kid has asked to shake my hand but now I want to shake his.... his Dad was an idol of mine when I was a kid!"
I thought that was such a lovely kind thing to say to me and coming from Alan Rudkin himself, I always treasured the memory.
I would have loved to have met him again and I was shocked to learn of his sad passing. I don't know Liverpool that well, but recently I had a nice few days there with my girlfriend who is a crazy Beatles fan - I had read on the internet that Alan used to frequent Ye Cracke public house and so, while there in Liverpool, I said to the girlfriend that we would have to go to Ye Cracke to have a drink in honour of Alan. Well, it was a great little pub and I was chuffed to see a nice picture of Alan behind the bar. The barmaids were lovely and friendly and everyone spoke highly of Alan. We certainly had that drink and my only regret is that Alan wasn't there too.
Happy memories of a lovely chap and a true GREAT boxer.