JIM MURRAY ; The Last Of The Best 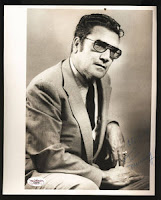 I've had the great opportunity to read many books. Most of which were related to boxing, baseball and football. One of my favorite books is Jimmy Cannon's "Nobody Asked Me, But...". Although less then half the book is devoted to my three sports, the 90 or so pages that were are to me, priceless. I still have the worn paperback edition and it will not leave my collection until I find a nice hard back copy somewhere. They didn't make writers like Jimmy Cannon any more, or so I thought.

Over the years the name of sportswriter Jim Murray kept coming to my attention. He was basically a west coast writer so I was very unfamiliar with his work. Then I saw his book "The Last Of The Best" and decided to take a chance. Realizing that Mr. Murray had passed away I found this book to be a compilation of his articles and essays. Guess what I found out ? They did still make writers like that up until Murray's death. Again I read only the subjects that interested me.

Jim Murray was old school. He traveled with the players. He played golf with owners . He had a terrific understanding of what he was writing about. He had a great gift of putting his words together like painting a picture. He made you feel like you were right there with him as he covered an event. He enlightened and educated his readers and he had a knack for humoring them too.

Since I grew up in Cleveland, Ohio I was not really aware of Jim Murray's work. I am now and I'm a much more knowledgeable person for reading it. Jimmy Cannon and Jim Murray. I tip my hat to two of the best writers that ever lived.