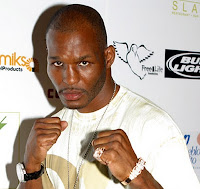 "Maybe I'm biased because I'm black, but I think that this is what is said at people's homes and around the dinner table among black boxing fans and fighters. Most of them won't say it [in public] because they're not being real and they don't have the balls to say it, "But I do think that a fighter like the Ray Leonards or anyone like that would beat a guy [like Pacquiao] if they come with their game,


Listen, this ain't a racial thing, but then again, maybe it is, but the style that is embedded in most of us black fighters, that style could be a problem to any other style of fighting." - Bernard Hopkins


-----
Look, Man, I don't want to get in a racial beef with anyone but that statements really does call for some type of rebuttal, even a brief one. I mean, how do you respond to a statement like that?  Bullshit is the first word that comes to mind

With one inane statement Bernard Hopkins has just relegated every nonblack fighter to a secondary status. There are in fact three possible reasons that Manny Pacquiao has not faced any black fighters.

First, early in his career Manny Pacquiao fought all his early fights excluslivly in Asia, most of them being in the Philippines.

Secondly, in the championship stage of his career Manny Pacquiao fought the best fighters of his division, period. Is it his fault that the best at that time weren't black or that the best happened to be mostly Hispanic fighters? The guys he fought were champions in their respective division; Marco Antonio Barrera, Erik Morales, Juan Manuel Marquez and Ricky Hatton. The only black fighter with a Leonard like style of fighting is Floyd Mayweather Jr. and if anyone can get him to sign the dotted line (good luck) Manny will fight him. To the best of my knowledge, Manny had already agreed to take the test. That the fight has yet to take place is squarely on Mayweather's shoulders.

Thirdly, maybe Bernard should consider the possibility that some of the black fighters in the lower weight division are ducking Manny Pacquiao. Who should he have fought? Nate Campbell? Too spotty a record and can't really be considered a serious threat. Zab Judah? Hold on, let me stop laughing,... okay, by the time Manny got to the higher weight classes, Judah, all on his own became a Persona Non Grata. He was a non issue by the time Pacquiao got to the Junior Welters. Tim Bradley, Devon Alexander and Andre Berto are all good fighters but all three are just now starting to make their mark. No one can seriously make the case that Manny Pacquiao is ducking them. So who exactly is he ducking? Why can't he or anyone else ask "Why is Floyd Mayweather Jr. avoiding Filipino fighters?". Now that's a fair question. If you can find one on his record I'll eat my hat.

While I agree with Bernard Hopkins that some black fighters do posses, albeit, to a lesser degree, a Leonard like style that is unique to African American fighters, I don't think they are, across the board, automatically better. If that's the case, why are two brothers from Ukraine holding the heavyweight belts hostage?

It's the man and his ability and nothing else.

What sickens me most is not what Hopkins said but this statement by Bob Arum "A fight with Shane Mosley would answer that situation,". If Pacquiao takes that fight I'll take back every good thing I ever said about him. Mosley, one of the best fighters of his era has seen his better days and though it pains me to say it, at this stage of his career it would sending him to the wolves for a big payday. Bob Arum should be made to go one round with Pacquiao just for thinking it.

Proves he got hit too much by Joe Calzaghe...

Yeah, I think he's getting a little punchy.