Saturday night, at the Palms Casino in Las Vegas, Nevada, Brandon Rios did what challengers are supposed to do, he went out and took the title from the champion, Miguel Acosta. In what turned out to be the toughest fight of his career, Rios hung in there after a rough start, made adjustments, came back and stopped Acosta in the 10th round.

In the first few rounds Rios had trouble with Acosta’s speed and range and was hurt more than once, but with dogged perseverance and determination he continued to stalk Acosta, resolute in his belief that he would find a way. Acosta, just as determined showed why he had not lost since 2003, in his last 19 fights. He was out boxing Rios, keeping him at a distance and at times he was out slugging him. When the middle rounds began Rios tightened up his defense, closed the gap and took the fight inside. It paid off. In the six Rios caught the champion with a left and a right but it was a stiff jab that sent him down.

Up until the first knockdown Acosta was in control of the fight. After the knockdown he seemed desperate and it showed in his face and in the way he was fighting. The tide had turned. Rios punching power was beginning to have an affect.

After the knockdown in the eighth, a left hook that caught Acosta as he was backing out of an exchange, the conclusion seemed inevitable. Acosta, a worthy champion, was hurt and Rios was not letting up. Still, it’s a fight and anything can happen. Acosta, showing a champion’s heart fought back but his punches had lost their snap and he was unable to keep Rios at a distance.

The end came in the 10th round when Acosta was caught by a series of punches and crumbled in the corner causing referee Joe Cortez to stop the fight. Brandon Rios was the new WBA Lightweight Champion.

Rios answered any and all questions that may have been asked of him. He showed a huge heart in Saturday night’s fight. He’s no quitter. Even when things were not going his way he never wavered. In boxing we call that Stick-to-it-ive-ness. Rios showed plenty of that. He beat a real champion in Acosta. After the fight there was no arrogance, justifiable pride, yes but no arrogance. He was just happy to be the new champ. 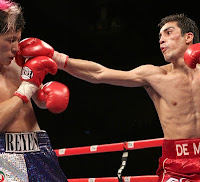 On the co-main event Tony DeMarco and Reyes Sanchez gave the fans at the Heartland Event Center in Grand Island, Nebraska, their monies worth, going the distance in a hard fought battle, with DeMarco getting the win. Sanchez, like Brandon Rios against Acosta, never let up, never stopped trying and he gave DeMarco all he could handle. For most of the fight though, DeMarco remained in control. Things might have been different if Sanchez actually had a punch.

Congratulations to Brandon Rios for winning the WBA Lightweight title with an exciting 10th knockout over champion Miguel Acosta and Kudos to Showtime Boxing and Bob Arum for a great fight and great matchmaking.

Unfortunately,I missed Demarco vs.
Sanchez-and somehow missed all four fighters;but I've been reading a lot about Rios-and he certainly was not overrated.