Joe Frazier: When the Smoke Clears


"He got as much out of himself as there was to give, and maybe more, and you can't ask any more of any man, including yourself" - Larry Merchant 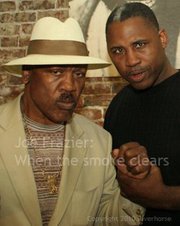 I was privileged, recently, to view a video of the new documentary "Joe Frazier: When the Smoke Clears". Joe Frazier's story has been told time and time again. The story is familiar to us by now. Yet director Mike Todd still managed to give us a fresh perspective on Frazier's life and career. Narrated by Joe's eldest son, Marvis Frazier, along with testimonials from family, friends and boxing personalities, including George Foreman, Bernard Hopkins and Larry Merchant, who share some candid memories. However, this is much more than a "This is Your Life" documentary. It is more like a well crafted, tightly woven tapestry that comes together to form a beautifully clear picture of it's subject, in this case "Smokin' Joe" Frazier, former undisputed heavyweight champion of the world.

The film begins with Frazier singing a reworked song made famous by Frank Sinatra, "My Way" and he was indeed doing it his way, as only "Smokin' Joe" can, a little slow perhaps and a little off key but with a passion and heart that has defined Joe Frazier to his legion of fans and admirers. The common belief is that Joe Frazier has been left bitter on the issue of Muhammad Ali, maybe at one time, but this peek into his current life says otherwise. If anything Frazier seems content with his place in boxing history, he is content with what he knows. So is his family. Joe Frazier is truly loved by his family, friends and fans and the film seems to answer that question "is it better to be popular or well liked?" As this film shows, being well liked, or loved, in this case,  travels a lot deeper than popularity. I believe this is where Frazier draws his contentment and satisfaction. Frazier seems to relish the attention and enjoys talking about the 1971 "Fight of the Century", a fight he won by unanimous decision.

Marvis Frazier, who wears his love for his famous father on his sleeves, has become, in a sense, the defender and protector of his father's legacy. The bond between father and son is at the core of the film. A brief look back at Marvis Frazier's fight with Larry Holmes was somewhat emotional and we see Joe's pain, immediately after the fight. Both Frazier's have continually given back to the community both in the rural south where Joe was born and in Philadelphia where he lives today. In the south he is remembered as a local boy made good who has never forgotten where he came from and in Philadelphia, a town known for the ferocious gym wars and tough fighters,  where he is heralded as the epitome of a "Philly Fighter". There are a couple of other clips, including Ali vs Frazier I and Frazier vs Foreman I, but the film focuses more on the Joe Frazier of today. This is the story that is being told

Growing up in the South, and later Philadelphia, Frazier experienced the full gamut of the black experience in America, contrary to the way he was portrayed by Muhammad Ali during their well covered rivalry. Joe, a proud man and more importantly, a proud black man has stayed close to his roots; family, friends and community. He has done so as the owner and operator of the Joe Frazier Gym, along with his son Marvis. Much of this documentary was filmed in the gym. Sadly, the gym was closed earlier this year for financial reasons. Still, that doesn't take away from what Frazier has accomplished over the years, nor can we ever count the number of young men that have been helped along the way, whether they became fighters or just good citizens.

There are some scenes in the film where an elderly Frazier is seen working the bag and shadowboxing in the ring.  If you look closely, into his eyes, you can still see the fire burning inside. That wry smile and knowing look gives the impression that Muhammad Ali is still on the receiving end of his punches, thus the look of satisfaction on his face. I cannot say with 100% certainty, that Joe Frazier has exorcised the bitter memories of his rivalry with Ali, nor can I say that he has truly forgiven him for the cruel words that cut Joe deeply. All I can say for sure is, that Joe Frazier has learned to deal with it, and is living life "His Way" and on his terms.

If you are a fight fan, especially if you are a life long fan of Smokin' Joe Frazier, as I am, than you will be moved by this film, and in the long run, isn't that what art is all about?

I had the privilege of meeting Marvis Frazier at their gym in Philly. I bought a glove with Joe’s signature and asked Marvis if he would sign it also, which he did. I live north of Toronto and had the grand opportunity of meeting other greats at their gyms like Freddy Roach. But I never met Joe and it is Joe who I love the most as a boxer and a real good person. I will take this opportunity to thank Joe for his past great performances and to let him know that when the smoke clears many more people will fully understand his contribution to the sport and community. God Bless you Joe and your Family.

I am looking forward to seeing it-and I still wouldn't want to ask him about Ali if he got up "on the wrong side of the bed".There waa a
story that during the making of 'Champion's Forever'(Ali,Frazier,Norton,Holmes,Foreman)that Foreman and Holmes had to keep a close eye on Frazier,regarding Ali;then there's the quote(I think in Sports Illustrated)Frazier:'If I were up there with him when he lit the Olympic torch',I would've pushed him in'.

Brian, I remember when Frazier said that. It didn't go over too well but I think he has mellowed some, but I don't think I would leave him alone with Ali anywhere.

Jmac, Frazier has read this blog before, maybe he'll read your message. Thanks for reading!

A website which gives perfect news and knowledge about the nation as well as world breaking news through the sports news, business news and many other types of news which is easy to read hard to ignore. Through Newsleaks we can easily find all kinds of News related to world like today's Eight bogies of Punjab Mail derail near Rohtak, 26 injured and many news related to world as well as what is going on in India's best topics likelatest terrorist attack in India
, Anna Hazare, baba Ramdev, and many other topics likeWho will become our President and many more. Newsleaks has a goodwatch on all kinds of News and have a positive approach to rule on minds & hearts. Everybody today has no time spare for News and all but infect all require to keep eyes on everything, so Newsleaks is here for every busy person with perfect news as well as perfect knowledge.