Catching Up on the Boxing Scene

It's been a while since I have hunkered down and written anything lately. It gets like that sometimes. I've been busy and just haven't had the time. There's been a lot going on in boxing too, some good, some not so good and some bad. It's time to catch up. 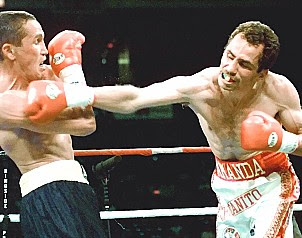 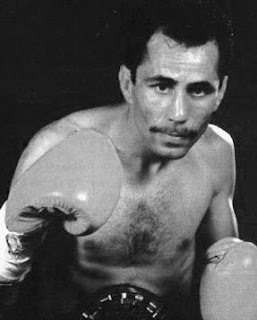 First the bad, in this case, the tragiclly bad. As you no doubt already know, Genaro "Chicanito" Hernandez passed away earlier this month, on June 7, 2011. I know, I know, it's hard to believe. Hernandez was only 45 years old. Way to young.

Chicanito was a fan favorite due to his courageous style of fighting but it was his willingness to continue fighting after being struck in the throat by Azumah Nelson after the bell sounded to end the 7th round of their 12 round championship fight in 1997, that cemented this fact into the consciousness of fight fans when Hernandez chose to continue fighting, opting instead for a "true victory", rather than a win by disqualification. He would win that fight by a 12 round split decision. It was a gutsy and honorable move on his part.

"Chicanito" began his career with a 4 round decision win over  Dino Ramirez on August 27, 1984 at the Forum in Inglewood, California. He would end his career  on October 3, 1998, with a loss to Floyd Mayweather Jr. losing the fight and the WBC Super featherweight title in the 8th round when he could no longer continue. In between he fought the best in his divisions, including Jorge Paez, Carlos Hernandez and the afore mentioned Azumah Nelson. The only other lost on his record was his 1995 fight with Oscar De La Hoya, when he was unable to continue due to a severely broken nose.

He won his first title, the vacant WBA Super Featherweight Championship, on November 22, 1991 by stopping Daniel Londas in the 9th round of their fight at the Complex Sport le COMEP in France. Hernandez vacated his WBA super Featherweight title not too long after fighting Columbian boxer Jimmy Garcia. Ironically, Garcia died as a result of injuries in his next fight with Gabriel Ruelas in 1995. Hernandez moved up to challenge Oscar De La Hoya for his lightweight title. He won the WBC Super Featherweight with his split decision victory of Azumah Nelson.

On  personal note, I would see Chicanito and his brother Rudy, every so often back in 1993 at the Brooklyn Ave Gym in Boyle Heights, where I was taking my son Andrew at the time. He had a great work ethic in the gym. He had an easy going personality and was friendly with all the kids in the gym, including my son. A couple of years later I saw him fight Jorge Paez at the Anaheim Pond in Anaheim. Paez, always a game fighter was never really in the same league as Hernandez. The fight was stopped on cuts in the 8th round with Hernandez getting the win. 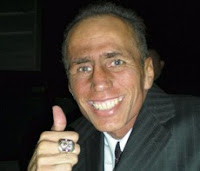 Genaro Hernandez was a class act, a champion in and out of the ring. Hernandez, a native of Los Angeles, was born on May 10, 1966 and died on June , 7, 2011. he died from a rare form of cancer, Rhabomyosarcoma, that attacks the muscle fiber connected to the bones. he is survived by his wife Lilliana, his son Steven, daughter Amanda, three brothers and two sisters, as well as his father. our condolences to the Hernandez family.
R.I.P. Champ!

A belated congratulations to the "Executioner" Bernard Hopkins on defeating Jean Pascal and winning the WBC, IBO and the Ring Light Heavyweight Championships on May 21 of this year, becoming, at 46, the oldest fighter in boxing history to win a major world title,  surpassing former Heavyweight Champ George Foreman, who won the heavyweight title from Michael Moorer way back in November of 1995. Those of us who saw the first fight between Hopkins and Pascal were convinced that Hopkins, regardless of what the judges said, won that fight. Hopkins, notorious for being a great but at times boring fighter has decided to fight with a "take no prisoner:" and plans on ending his career wit a bang. Here's hoping  the old man goes out the way he wants to,

While Hopkins seems to be getting better with age, a few divisions south of the light heavies, Sugar Shane Mosley is struggling in his battle with Father Time. Mosley, for all practical purposes, put absolutely zero effort in his fight against Manny Pacquiao on May 7th. Mosley didn't outright  quit but he did quit tying and that amounts to the same thing. I ain't mad at him though, Mosley has been through some tough ring wars and has never given anything less than a 100% of himself in every fight he has been in. His fight with Floyd Mayweather Jr. last year was a portent of things to come, so was his fight with Sergio Mora which ended in a draw. In the Mora fight Mosley probably should have got the win but a uninspired and lackluster effort by both men made the outcome a virtual "Who gives a crap?".

I don't think Mosley was conning us when he signed to fight Pacquiao I think time just caught up with him and he was caught off guard. he was sincere in his belief that he had the right stuff to beat him. I was really hoping to see Mosley come away with a victory. At one time maybe but not in 2011. Mosley has been one of my favorite fighters almost since he began his pro career but I can't imagine anyone willing to shell out the bucks for another PPV fight but who knows?

Manny Pacquiao? As far as I'm concerned a victory over an aged Shane Mosley amounts to nothing.

A Goodbye to Shirley O'Neill
Shirley O'Neill, the wife of Bill O'Neill was laid to rest on Thursday June 9th at the Memory Garden Memorial Park in Brea, California.. The funeral was a celebration of a life well lived and well loved. Testimonies by friends and family spoke of her generous and giving heart. After the funeral service, family and friends gathered at the Summit House in Fullerton for food, conversation and remembrances. Our thoughts and prayers are with the O'Neill family. R.I.P. Shirley.