The Olympic Today . . . By Rick Farris 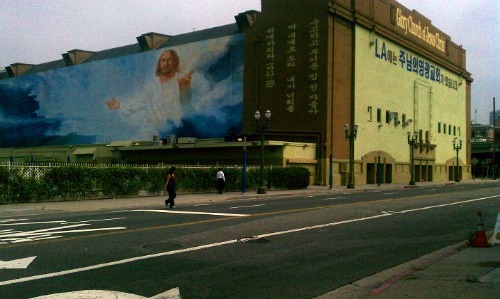 
"Are we close to the Olympic?", Remy asked. "Not far," I answered, "We'll be there in about 15 minutes."
Our friend, Remy Damlien, is in town for this week's CBHOF lunch, and I want to show him around town a bit before he returns home next week.

We started the day at 6:30am, where we met at his hotel which is right next door to the Wild Card Gym in Hollywood. While here, Remy has hooked up with a trainer at Wild Card, and joined me for some early morning road work & pad work in the Hollywood Hills.

We had our workout, and then we drove a few blocks to eat breakfast at Art's Deli in Studio City.
I ordered an omlette, while Remy ordered a pastrami sandwich. "We don't get much pastrami in Norway, and the sandwiches only have a few slices of meat. Monica made sure that Remy's sandwich would not leave him hungry, and after we finished, it was off to show him what used to be The Olympic Auditorium.

We drove downtown and pulled into the Olympic's parking lot, and we would both see the Olympic, now as a Korean Church, for the first time. We snapped a few exterior photos and then just let ourselves in the building to walk around. A few walls have been added, and a lot of seats removed, a redesign of the floor area, but it was still the same old gal, just wearing a different wardrobe.

For a moment I saw the building as an old lady, one who was smiling when she saw me enter today, as if to say, "Now don't laugh!" I didn't laugh, and I didn't cry, I was just happy to see her still standing. I felt as if I knew the old broad's secrets. At least a few, anyway.

I tried to take a photo, but the building was pitch black. As our eyes adjusted we could see her, all dressed up for the first time in her life. I tried to show Remy where things were, and we talked about the long gone mural of Dempsey that once decorated the north & east walls.

I pointed out where the dressing rooms were, and the aisle that took us to the ring on Thursdays nights.
I refused to get sentimental, just wanted to say hello. This was the house where Aragon was booed, and where Mando Ramos was cheered.

hello mr. farris,
I have an old engraving of Spike Sanborn, of which i have created letterpress art from. Here is a link to one of the pieces:http://www.flickr.com/photos/opheliachong/6053338313/in/photostream

I found you by googling "spike sanborn" to find out who this boxer is.
thanks for posting about him! it makes the art more full of life.

Thanks for this. I really like what you've posted here and wish you the best of luck with this blog and thanks for sharing. Top Rated Boxers