WHERE HAVE YOU GONE JOE DIMAGGIO: REAL BOXING TRAINERS? 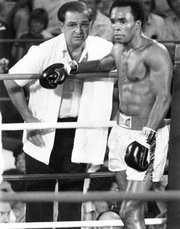 Charlotte, NC- Well, I saw and heard it again this weekend; a fighter comes to his corner after getting his face re-arranged. He has to wait at least eight seconds for the stool to finally get into the ring. His so-called “trainer” doesn’t pull on his foul protector so he can breathe deeply and easier, then allows the fighter to prop his arms on the ropes instead of keeping them down to enhance blood flow and recuperation. The “trainer” wipes his guy’s face with a towel, covers his forehead with about ten pounds of Vaseline, gives his guy some water, pours water on his guy’s head (after putting Vaseline over his eyes), and his advice to his guy after getting pummeled for the previous three minutes? “Just throw punches, you doing good!”

SOME (MOST?) TRAINERS TODAY ARE MERE IMPERSONATORS!

It is amazing to me that in the boxing game at the professional level there are apparently so many “trainers” who neverexperienced the sport at even the most rudimentary levels of competition, yet are allowed to get licensed and work in corners as “experts”and are even at times acknowledged by some guys impersonating themselves as media, when all they are is a somebody with a keyboard and a press credential.

NOT THE KIND OF GIG “YOU LEARN ON THE JOB”

Granted, you do not have to actually stick your hand into the fire to know that it will burn you. However, there is something about having that experience that helps you relay that information to others with a bit more urgency. In the same way, you do not have to have been a fighter to become a good trainer. Angelo Dundeeis an excellent trainer, and if he ever fought, I am not aware of it.

NEED TO BE BAPTIZED & THEN TAUGHT THE GAME

To be a good trainer, you do have to immerse yourself into the sport for years. You have to hang around it, eat, sleep, watch learn, pick up little nuances here and there that will in time make big differences. You have to develop a sharp eye to be able to size up mental and physical qualities, not only of your fighter but of his opponent as well. The fighter that was getting the dickens beat out of him this weekend, whose “trainer” told him “Just throw punches” was getting hit so much because every time he threw a jab, he dropped his right. His opponent picked up on it and started timing his own left hooks and was nailing him! But if the extent of your instruction as a”trainer” is “Just throw punches,” that might work in the amateurs, but your guy is going to get killed in the professional ranks.

As I have said, there are a few good trainers,coaches and teachers of the manly art of self defense around today, precious few. But sadly, there are also too many goof-balls that get a license and call themselves trainers who are nothing of the sort. Just as we lack a depth of truly hungry fighters with that “fire in the gut”, so we also have a lack of and a dilution of the ones who used to “stoke the fire” in the gut!

Think about it. With a precious few exceptions as far as trainers go, in terms of knowing how to train a fighter. and in terms of general boxing knowledge, is there really anyone out there who is close to comparing to Lou Kemp, Whitey Bimstein, Freddie Brown, Jackie McCoy, Ray Arcel or Charley Goldman?

IF YOUR TRAINER DOESN’T CARE, WILL YOU?

And when you watch almost any heavyweight bout today on any card, almost always one if not both fighters look like a “before” example on a Weight Watchers commercial. The only thing I can figure is that the lax mental attitude of our society today has affected our “trainers” and fighters, as well as fan’s for tolerating an inferior product. I mean, many times the poor physical conditioning is obvious.

TRAINERS NEED TO ACCEPT RESPONSIBILITY TOO!

That has to come back on the “trainer” giving in to the whims of the fighter. I know that if I had told my trainer, Lou Kemp, “I don’t think I’m gonna run or spar today,” two things would have happened, in this order; 1) He would have kicked my lazy tail, and 2) He would have canceled the fight. Period. Not out of spite or some power control issue. He cared about his fighters and he cared about me. He knew if I wasn’t right mentally or physically going into a fight, I was going to get hurt. That’s what a trainer does.

You have to analyze and prepare a fighter physically and mentally to fight. True conditioning requires a fighter to always be busy. There are no secrets to hard work and plenty of it.

FIGHTERS NEED TO ANALYZE A TRAINERS NET VALUE TO HIM

Also, many of today’s fighters are allowed by their “trainers” to fight dumb. They follow their opponents around the ring in a straight line. Trainers don’t know how to teach cutting off the ring. They also fight standing straight up, they don’t know how to use a crouch or to bob and weave. The great lessons of the past are being lost because we don’t have anyone to teach them. The Old School Masters showed us the way. but many think the “New and Improved” is better…”Just throw punches, you doing good.”