AUSTIN TROUT TO DEFEND HIS WORLD CHAMPIONSHIP IN EL PASO 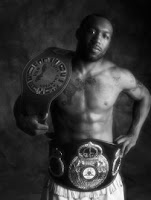 Junior Middle-Weight-World Champion Austin Trout, From the Cruces, will defend his belt November 11 at El Paso’s Cohen Stadium against Australian challenger Frank LoPorto. The championship fight will be televised on Showtime.

Trout, born in El Paso, is an undefeated champion (23-0, 13 KOs) who will be making the second defense of the World Boxing Association (WBA) championship he won from Mexican Rigoberto “El Español” Alvarez last February 2 in Guadalajara, Jalisco. He had his first title defense against Mexican challenger David “Destroyer” Lopez last June in San Luis, Potosi, Mexico.

Trout, 26, is an outstanding boxer/puncher that readily capitalized on the first opportunity he had to become champion. He went to Guadalajara, the city of boxing Mexican greats Efrén “Alacrán” Torres and Jose Becerra, both former world champs, and took the title away from popular Rigoberto Alvarez, older brother of Mexican boxing sensation Saul “Canelo” Alvarez. Also, he returned to boxing-crazy México to defend his title, and he came out ahead against dangerous puncher David “Destroyer” Lopez. Frank LoPorto is a 33-year-old Australian boxer with a 15-4, 7 KOs who’s getting his first crack at a world title. LoPorte has fought his whole career in his native Australia and has won his last two bouts by KO.
By Randy De La O at October 16, 2011

Javier. Great info on some Texas boxing. I've been trying to find any connections to Sam Magee's boxing club. He ran a camp in Waco during early 90s. He handled Alex Vargas from Brownsville Tx and Red Murphy "Murph". He also matched up and handled Quincy's tournament champion (92) John Guthrie. Vargas and Guthrie even fought a heavyweight contest in 92 against each other. Split for Guthrie. Anyway. ....... If you have any info on Sam or any of these fighters I'd appreciate the update. Thanks for your time. Keep posting great stuff. Carson

Trout is a real specimen. He should win this next bout.

Carson. I have heard of both Guthrie and Vargas. Vargas used to fight all over Texas. John Guthrie I only remember from the beating he gave Vargas in Mexico. It was an upset win for Guthrie at the time. I been following the boxing scene in Texas for a long time. If I can find any more out about Sam Magee or his boxers I will post it.

I think Sam Magee is dead. Also think Vargas Guthrie fight might of been in 91.

Sam Magee died in 1995.
John Guthrie Vs Alex Vargas was in 1991.
Murph only had like 3 or 4 pro fights.
Alex Vargas had a bunch (at least 15) fights all over Mexico
Guthrie fought in Matamoros and Guadalajara Mexico and in Brownville and Dallas Texas.
Many consider Guthrie one of the hardest hitting heavyweights of the 90's.

Sam Magee died I'm pretty sure. Guthrie was a top ten power puncher in the 90's.

Told you Trout was great. Look how he handled Cotto!!!