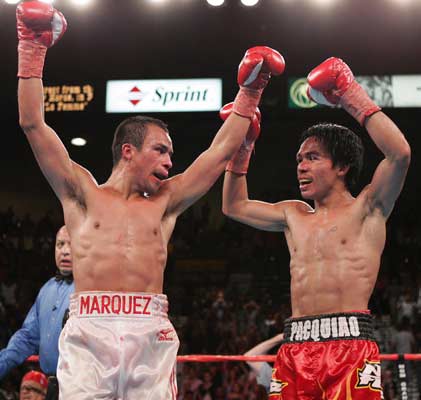 Manny Pacquiao and Juan Manuel Marquez will go at it again tomorrow night at the MGM Grand in Las Vegas, Nevada. They will be fighting for Pacquiao's WBO Welterweight title. I can't find too many people to agree with me but I think that Marquez has a chance to win. Regardless, I'm throwing my support behind him. Marquez, arguably, the best counterpuncher fighting today, has always had the right style to go up against Pacquiao. He has always found a way to upset Pacquiao's rhythm. I'm hoping he can do it again. Still, this is a fight that should have been made a few years ago but it is what it is. 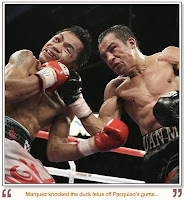 Pacquiao and Marquez have fought twice before; a draw in 2004 and a split decision in 2008. The fights, the rivalry and the results have been discussed ad nauseum and there's no point in going over every detail again except to say that the difference between the two has always been razor thin. Given the closeness of both fights I don't understand Pacquiao's irritation at Marquez for believing that he won the fight, especially since a large part of the boxing world feels the same way.

Pacquiao seems to be concerned about the fight too. By his own admission, he is training harder for this fight than for any other. So he at least is giving Marquez some due respect. There is also a rematch clause that was added.......just in case. On the other hand, he seems to be looking past Marquez and to a fight with Floyd Mayweather Jr. sometime next year.

Pacquiao has momentum on his side, and he is a good fighter, no doubt (I'm still not sold on his greatness) and of course the odds and circumstances favor him, including the weight. If he has taken Marquez for granted, if he makes a mistake, if he has done one thing wrong during training, Marquez is the man that will make him pay.

I know that a fight between Pacquiao and Mayweather is good for boxing. But the way see it, if Pacquiao can't get past Marquez, than who cares about it? Not me. I believe that if this fight meets any and all expectations, regardless of who wins, it's a big shot in the arm for boxing. The future will take care of itself.

Throughout most of his career, Marquez has fought in the shadow of his countrymen, Erik Morales and Marco Antonio Barrera. Now, he has out lasted both of them and has established his own legacy. Because of his draw and split decision loss (Both controversial), he has also fought in the shadow of Manny Pacquiao. I'm hoping that tomorrow night he steps out of the shadow.

I honestly don't know who will win tomorrow but I do know that Marquez will give every ounce of himself in this fight, they both will. I also know that Manny Pacquiao has never convincingly beaten Marquez. They both have something to prove to each other, and to themselves. Both are confident. No matter how you look at it, both men have been remarkable.

That loud shouting you hear coming from Whittier will be me screaming for Marquez to win, any kind of way.

As always, let the best man win, but here's hoping, that for Marquez, the “third time's the charm”.

don't believe u.. yes marquez can stand and fight up to the end of round 12.. yes manny is having a hard time on JMM but how abt JMM on Manny? He also is having a hard time knocking PACMAN down.. Cause if we will believe what u are saying that JMM won over Manny, where are the special things and domination that JMM did to beat Pacquiao? He did not even knock him down... yes he survived on the 3 fights.. and so is PACMAN.. If u want to beat a champion dominate him on the fight, what u are saying is because the fights are close so JMM wins? It just so happen that both the 2 fighters styles are match for each other,so all 3 fights were close,but it doesn't mean JMM wins all the fights.. watch the replays bro.. and u will not see JMM dominate Manny to win the fights... Sorry stats shows why MP wins...

Great article....!!!Nice to know about new things with helping concept.

OT: The world is all eyes and ears for May 2, 2015. The Floyd Mayweather Vs Manny Pacquiao Megafight will be epic, that's for sure!

This is going to be one hell of a match keeping their history in mind. Looking forward to know what will be the result. Thanks for sharing the details.

Mayweather vs Mcgregor live said...
This comment has been removed by a blog administrator.
12:17 AM

The 25th Annual SAG Awards service will be simulcast live on TNT and TBS on Jan. 27 at 8 p.m. ET/PT. Watch Stream Sag live