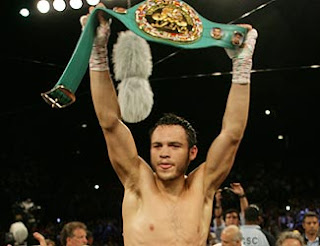 After watching the Julio Cesar Chavez Jr. vs Andy Lee title fight that occurred in last night, I was actually impressed with Chavez Jr for really the first time in his much heralded career of facing hand picked tomato can opponents. Although Lee was a fighter who once again seemed to be right in Chavez' wheel house for his strengths, Slow, stands right in front of you, not huge power etc.. And despite the fact that the ring was probably the smallest ring I've seen since I bought the WWF play set for my sons for Christmas 20 years ago, he did very well against an Emanuel Stewart trained fighter. Lee isn’t the caliber of a Sergio Martinez, but, Chavez did impose his will on Lee and ultimately knocked him out with a perfectly timed right during a barrage of punches. Chavez also showed a good chin which he will undoubtedly need as he steps up his competition since his defense is woefully lacking. I Think a bit more time with Freddy Roach will help him a lot and pay dividends down the road.
By ScottG at June 17, 2012

Nice writing Scott, and a fairly accurate assessment of the fight. I was impressed by Chavez as well.

In Chavez' defense, while I do agree that he has fought his share of tomato cans, it should be remembered that he had no amateur career, so the tomato cans sort of served as his training grounds, so to speak.

Having been a fan of Chavez Sr I hope Jr is at least half s good, if so we might have something. Still, at this point it's hard to tell if it's an illusion or the real thing. We'll find out when he fights Martinez. I think he has a shot.

I agree with everything you said Randy. My only problem is the hoopla and grandiose way they promted his fights and career before it is deserved. Although that is no fault of his own, he has definately been on the receiving end of the benefits from his fathers stellar career.

I'm with you on that one. I guess being the son of Julio Cesar Chavez there no way around that. As much as I like Chavez Sr. I think Junior would have been better off if dad had kept a much lower profile. Just my opinion.

watch out for Chavez vs Martinez Chavez next fight after his big win!