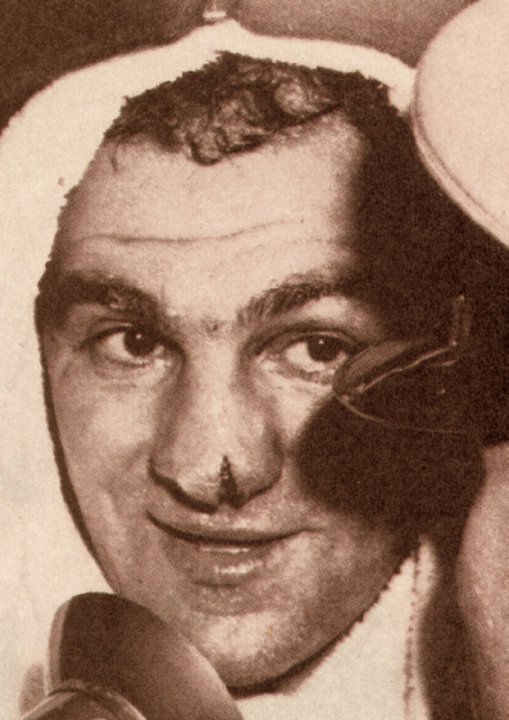 The split nose occurred during Rocky Marciano's rematch with Ezzard Charles. The first fight with Charles, on June 17, 1954, went the distance with Rocky winning a 15 round decision. The rematch took place three months to the day, September 17, 1954. Marciano was caught with an elbow and suffered a split nose. The fight was in danger of being stopped. Marciano fought on, seemingly undisturbed by the cut. He went on to stop Charles in the 8th round. That split nose helped create the legend of the Rock. Who but Rocky Marciano could, or would, have fought through that? With all that Rocky still manages a smile for the camera.

OT: Pacquiao will be getting back in the ring on April 9 with Timothy Bradley. Fortunately we can still see his training and fights at Manny Pacquiao Video Channel . Go check it out!

That shows his passion for the sport, I doubt I could have done anything like that, would have asked referee to stop it immediately and forfeit the match.

Marciano was a tough son of a bitch. Ezzard is a tremendous boxer, virtually flawless in his fundamentals and technique. That’s why Marciano, a slugger, had problems with Ezzard.

you still wondering where to buy high quality counterfeit money? Look no longer as you have found what you are craving for! We are a Company specialist in production and sales of counterfeit bills – a leading chemical and IT laboratory capable of producing a wide variety of notes, including USD, CAD, euros, GBP, and many others.href="https://authenticbillssolution.com”>Fake money for sale