The Good Son: The Life of Ray “Boom Boom” Mancini By Mark Kriegel 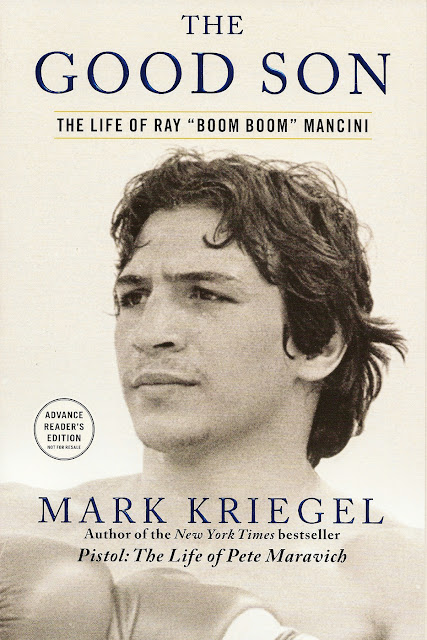 Kudos to Mark Kriegel for his brutally honest telling of the life of Ray Mancini, former lightweight champion and one of the more popular and beloved fighters of the 1980's, arguably one of boxing's greatest era. Kudos to Ray Mancini as well, for his willingness to share his story, character flaws and all.  Kriegel and Mancini do not sugar coat his life and Mancini, to his credit, makes no excuses. I saw every one of Mancini's nationally televised fights back in the day. I saw all the ups and downs. I'm familiar with his career as a fighter and with the type of fighter that he was.  Mancini's style can only be described as “All Heart”, and it was his big heart that took him beyond his own physical abilities. Ray Mancini is what we like to call. an honest fighter It is this type of fighter to which I am almost always invariably drawn to.

It's no secret to anyone that has followed Ray Mancini's career, or boxing for that matter, that his story begins with his father; Lenny “Boom Boom” Mancini. It was the basis for his own motivation to fight and it was his belief that but for WWII and the injuries that his father incurred, he might have been a champion. Lenny's own story would make for one hell of a movie. It was Ray Mancini's soul driven quest to win a title for his father.

Kriegal begins his story with Ray's grandfather, Nicola “Nick” Mancino (Mancino is the original spelling). It was Nick who left Sicily in 1913 to come to America and ultimately settled in Youngstown, Ohio, a once thriving steel town. This was the genesis for the Mancini's in this country. Lenny's own story though proves to be every bit as compelling as Ray's, maybe even more so. Kriegel does his homework on Lenny and paints a picture of a tough hard fighting young man, who knew only one way to live and to fight, and that was forward, just keep moving forward. It was that “Forward “gene that was passed on to his sons, Lenny Jr and Ray, especially Ray.

I don't want to spoil the book for anyone that has yet to read it so I'm not going to go into every little detail but I do want try and capture the essence of this book which I believe to be a well constructed story of a man's life. While most of us know the story of Ray Mancini the boxer, we don't really know Ray Mancini the man. Mark Kriegel introduces us to Ray Mancini the son, brother, husband , father and friend.

Kriegel takes us chronologically through Ray's fights , including his heartbreaking knockout loss to Alexis Arguello in 1981 and to his title winning effort on May 8, 1982 when he stopped lightweight champ Art Frias and captured the WBA Lightweight title. Frias was stopped in the first round of a short but exciting back and forth fight.

The cornerstone of this book and the pivotal point in Ray's life was Ray's fight on November 13, 1982 with the unknown and seemingly over matched fighter from Korea, Duk Koo Kim. After a hellacious fight that caught everyone off guard, including Mancini. Mancini, as was his way, fought moving forward and throwing everything he had but in Kim, Mancini had met his match. At least until the 14th round when Kim was felled by a Mancini right hand. Kim made a valiant effort to rise but the fight was immediately stopped by referee Richard Green. Seconds later Kim fell into a coma and died a few days later as a result of injuries sustained during the fight. For Ray “Boom Boom” Mancini, Lightweight champion of the world, life would never be the same again. Three months later Kim's mother would commit suicide and sometime later so would referee Richard Green.

Kriegal painstakingly takes us through Duk Koo Kim's life and the circumstances leading up to his fight with Mancini. He does the same for Bobby Chacon and for most of the detailed characters in his book. It is that detail that gives life to the Good Son and makes it such a good read.

The death of his brother Lenny, the death of Kim, the suicides of Kim's mother and Richard Green, the eventual loss of his lightweight title to Livingstone Bramble and his failure to recapture the title all led to Mancini's feeling of being overwhelmed by life and circumstances. Who wouldn't be? We can all relate and it is in this part of the book that Kriegel  really excels and shows us an unseen side of Ray Mancini the man.

Ray Mancini was a blue collar fighter if ever there was one. He fought not only for his father but for the people of Youngstown, Ohio and Italian Americans everywhere. This was his strength and his burden.  He was also a man in perpetual need of adoration and he didn't always handle that so well. In this book we learn that ultimately Ray Mancini is just a man trying to do what the rest of us are doing, and that is survive the best way we know how, one foot in front of the other, always moving forward. This is the lesson that Ray has learned as his quest evolved from seeking a title for his father to seeking peace of mind and contentment for himself. In the ring or out, you can't help but root for Ray “Boom Boom” Mancini to win.

it is a nice story
The death of his brother Lenny, the death of Kim, the suicides of Kim's mother and Richard Green, the eventual loss of his lightweight title to Livingstone Bramble and his failure to recapture the title all led to Mancini's feeling of being overwhelmed by life and circumstances. Who wouldn't be? We can all relate and it is in this part of the book that Kriegel really excels and shows us an unseen side of Ray Mancini the man.
www.getsoftwarekey.com