By Dan Hanley
(With expressed permission) 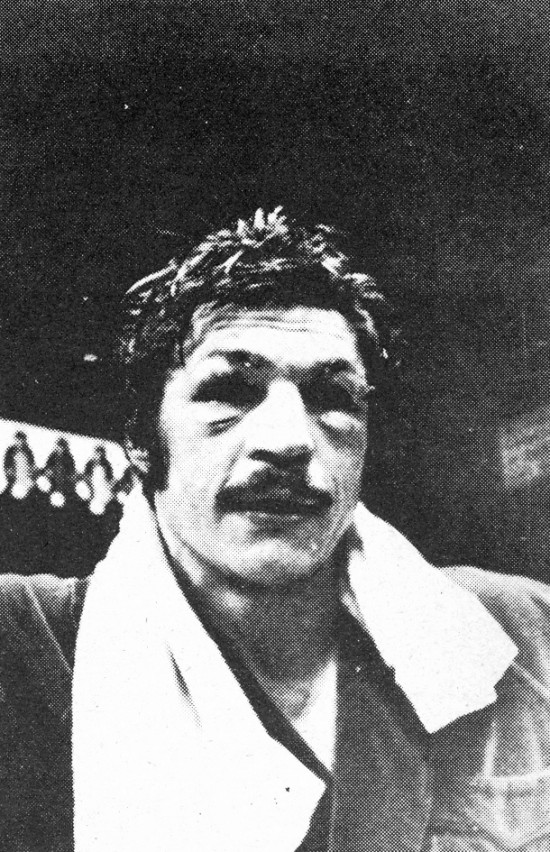 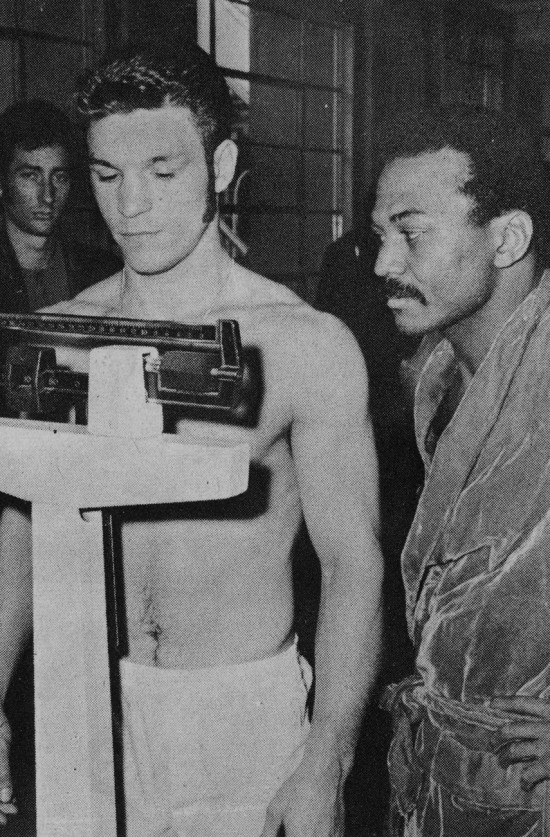 DH: Was there any followup on that?
BB: We were in his hometown so, no. But, I’ll tell you this. Remember when I said I spit out what was in my mouth? Well it got on me when I did. And at the end of the fight my skin and my trunks were burned where it landed.
DH: Several months after the second fight with Napoles, Edwin Dooley, the chairman of the New York State Athletic Commission withdrew recognition of Napoles as world champion and set up a title fight between you and Hedgemon Lewis for the NY version of the world title. What was the cause of this?
BB: When we signed for the rematch with Napoles, we too inserted a rematch clause into the contract and Napoles refused to honor it. The NYSAC then stripped him of recognition.
DH: Tell me about the first fight with Hedgemon Lewis.
BB: It was 15 rounds. I thought I won it. The newspapers thought I won it. I took Lewis to a place he was never used to. I really worked his body over but he got the decision.
DH: I gotta ask you this, Billy. What happened between rounds between Carmen and Tony?
BB: (laughing) I forget which round it was, but the bell rings ending the round and I turn to go back to my corner and apparently there was some dispute on who was going to give me instructions, so they had a bit of a physical altercation. I stopped in my tracks. I wasn’t sure if it was safer to stay in the middle of the ring.
DH: Despite a second loss to Lewis, you were still the top contender. But you received no favors in Baltimore against Jack Tillman for the North American title. Tell me about that fight.
BB: Oh, man, what a robbery! I dropped him twice, pressured him the whole fight and they give it to him in his hometown. Tony, my manager went nuts. He pushed the referee, he called out the judges to come up into the ring. He was going to kick their ass right there. That’s how bad it was.
DH: After a good twelve years of slinging leather, cuts were really plaguing you by this time. Stoppage losses on cuts to Zovek Barajas in L.A. and Eckhard Dagge in Germany had to have had you considering packing it in.
BB: It didn’t really because it was the same cut everytime. Under the right eye. And It wasn’t helping matters what they were doing to me on the road, such as in Germany. I swear, that doctor must’ve used an 8-penny nail on me to stitch me up. You should have seen the shitty job he did on me. It wasn’t until after the Papo Melendez fight in Albany that a doctor told me to come and see him. He removed all the scar tissue I had around the eyes, which was breaking open. 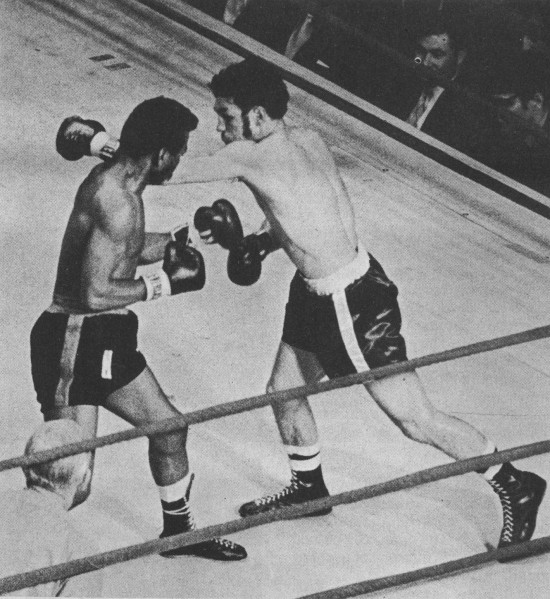 DH: You seemed to have had a real love affair going with Paris. You beat Robert Gallois, Roger Zami, Jacques Kechichian and lost a highly disputed decision to Roger Menetrey over there. Did the French just take to your style?
BB: Yes, they did. See, over in Europe they’re taught this very straight upright stance. I think I was just so different to them with the way I fought and of course, I loved banging the body. They liked my style and they paid very well over there. As for the Menetrey fight, yeah, I beat him by at least two points, but he was their boy, so what can you do? But I’ll tell you a funny story about the Kechichian fight. It was only Tony and myself over there and we needed another cornerman so Terry Lawless of England helped us out. I knocked out Kechichian in six and when we get back to the dressing room Lawless looks at me and says, “Billy, you’re a great guy and I like working with you but, I’ll never let you fight John Stracey.” I looked at him and said, “Who’s John Stracey?” (laughing) I must admit I wasn’t really following my competition at the time. Now, having said that, I’ve gotten to know John Stracey over the years. He’s not only a great guy but he wouldn’t have avoided anyone. But Lawless was his manager and I found it complimentary that he wished to avoid me.
DH: After the Rocky Mattioli loss in Australia you embarked on another comeback reminiscent of 1967. Ten straight wins and a draw with Everaldo Azevedo - who was coming off a disputed loss to Carlos Palomino for the title - placed you back in the top ten where you received that call once again at the age of 35. Tell me about your title shot at Pipino Cuevas for the welterweight title in L.A.
BB: Well remember, this was back in the day without the attached thumb on the glove. I mean, you could grip an object with this glove. It wasn’t intentional, but it did happen. I moved one way in the 1st round and caught the full thumb in my right eye. My vision was gone and they wouldn’t let me out for the 2nd round. I went straight to the hospital where they operated on me - successfully - for an orbital blowout of the right eye. I was told in advance that that was the end of my career.
DH: Almost 17 years of climbing through the ropes and now it was done. What did you get into now that it was over?
BB: I had been working for Pabst Blue Ribbon for about a year at the time and went to work for them full time doing PR and sales. I was with them for about 12 years. I was also working for the NYSAC as an inspector and as Deputy Commissioner for the Albany-Buffalo-St. Lawrence area. And finally I went to work for the Mid-State Correctional facility in various positions. I worked for them for 17 years until I retired.
DH: In your lengthy career was there any fighter out there whom you missed out on, whom you really wanted?
BB: There was three I regretted not getting in there with actually. I would have liked to have fought Clyde Gray from Canada, a title fight with Carlos Palomino, and of course, that third fight with Jose Napoles.
DH: At almost 70 years of age, what have you been doing with yourself these days?
BB: I’m simply enjoying life. As a matter of fact, my wife and I are on our way this weekend up to Belfast, NY, to attend the Bareknuckle Boxing Hall of Fame banquet. Carmen was inducted in ‘09, I was inducted in ‘10 and Tony Graziano is being inducted this year for what he’s contributed over the years for upper NY state boxing. I’ll be accepting on his behalf.
DH: I take it, Tony’s too frail to make it?
BB: (laughing) Oh, no! He just avoids the spotlight. Let me tell you a crazy story about that old guy. Recently, he was out in his boat doing a little fishing and another boater fell into the water and started drowning. Well, Tony runs his boat over to him, fishes him out and runs him to shore, saving his life. Everyone on shore can’t believe it. They’re calling the papers to get over there with their cameras because they have a hero on the shore that just saved someone’s life. You wanna know what Tony did? He gets in his boat and takes off. And he’s 90 years old!
#  #  #
To say they raise them tough in Canastota, NY, would be as redundant as saying boxing can be a bit gruelling. A fitting epitaph to the boxing career of this 74 fight veteran of the fistic wars was bestowed by none other than Harold Lederman. In a recent conversation with Harold I mentioned I would be interviewing Billy Backus. Harold’s response was succinct and to the point. “Billy?! Oh, Danny, that was one tough bastard!”
See ya next round,