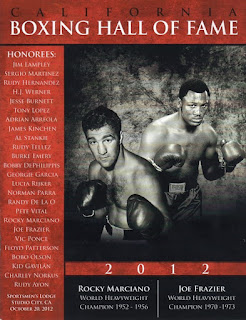 I'm a little late in getting this out and I didn't want to let any more time go by without telling you about the 2012 California Boxing Hall of Fame Induction Banquet  at the famed Sportsmen's Lodge in Studio City, California. It was a record attendance with the best of West Coast Boxing in attending, as well as some guests from the East Coast and more.

Tony “The Tiger” Lopez was on hand to receive his induction and his pal, Richard “Mr. KO” Savalas was on hand to share the moment with him. I had a chance to talk with both of them and it was an honor to spend time with them.

My friend Charley Norkus Jr. and his family came in from Long Island, New York to accept the honors for his late father, Charlie Norkus Sr., an exciting and tough top contender in the 40's and 50's. Rick Farris, Vice president of the California Boxing Hall of Fame brought it to the attention of the crowd that Charlie Jr. was one of the first responders on 9/11 when the Twin Towers were attacked and destroyed by terrorists. Many from his station died as a result of that attack. Charlie is an honest to goodness American hero and he received a well deserved standing ovation.

One of the highlights of the day was watching legendary female fighter, Lucia Rijker,  receive her induction. A great fighter and a great person. She's still slugging away, training women fighters and doing her part to improve women's boxing.


Current middleweight champ Sergio Martinez was schedule to receive his induction but was unable to attend due to an injury and upcoming knee surgery. I was a little disappointed but that's just the way it goes sometimes!

The Inductees for the 2012 California Boxing Hall of Fame are as follows:

Yes, that;s my name you see at the bottom of the inductees list and no, it's not a mistake, though I wouldn't blame you for thinking it was. In no way, shape or form do I think I belong in the same league as any of these inductees. In fact, I called the CBHOF President Don Fraser when I received the letter of induction  just to make sure. I let him know in no uncertain terms that I just didn't belong with these guys. His response to me was, “Randy, some times the boxing community just wants to recognize one of their own”.  I was overwhelmed by it all. I can accept this as an “A” for effort. I hope you will too.

With me on this day were my wife Jeri and our children; daughter Meranda and  our granddaughters Mariah and Maddie, along with their father Robert Guardian, our son Andrew, who flew in from Seattle, Washington to spend the week with us, and our youngest daughter Savannah and her husband Josh Guerrero. My brother Dennis, his wife Teri and their daughter Samantha were also there. I appreciate all who came out to support me, including my cousins David Robles Sr & Jr., David Delgado and my friends Ed Hernandez Sr, & Jr. and all the rest who chose to spend the day with us.

I'm not much for speaking in front of a crowd but I did what I had to do. I dedicated the day for my family and I to my late grandson Nathan Joseph Guardian.

The best part of the day was seeing old friends and meeting new ones. You will never convince me that the boxing crowd isn't the best in all of sports!

It was an overwhelming day for me and an honor that I won't forget. My thanks to the California Boxing Hall of Fame, Rick Farris (Who worked his heart out for this one), Frank Baltazar Sr and Don Fraser and the 2012 Selection committee. Thank you for giving my family and I a day to remember!

Congratulations to all the inductees, including CBHOF Presidwnt, who was presented an "Outstanding Lifetime Achievement" award by Gwen Adair and Steve Harpst in the form of a prizefighter statue made by  Steve. It was a well deserved honor.

Thank You, Randy. I set out of NY with just a few things on my mind. One accept the HOF induction Award for my father, and to meet my California Friends who I been talking to on-line over the past year or so, Rick Farris,You Randy and your family, and Frank Baltazar. One of the highlights of my trip was getting to talk to you and meeting your daughters and son.

Congratulations to you Randy on your Honor, being one of CA toughest fighters and one of the kindest gentleman I can call my friend.

Very significant Information for us, I have think the representation of this Information is actually superb one. This is my first visit to your site. Top Rated Boxers

Very amazing and informative article i like the way writer wrote this article it helped me a lot in research of Greatest Boxers of All Time if you want to know more info about Boxing, please click here on www.tributeboxing.com.au.