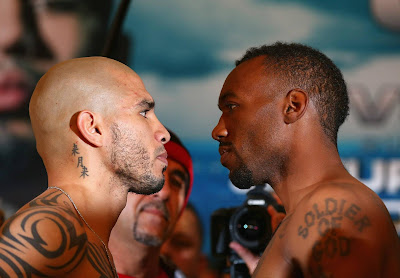 There is no denying that Miguel Cotto  of Puerto Rico, will be the biggest test in New Mexico's Austin Trout's professional career. For the better part of the last decade, Cotto has been at the forefront of the elite fighters, losing only to Antonio Margarito, Manny Paquiao and Floyd Mayweather Jr. In both the Margarito and Pacquiao fights, he was severely beaten, however he did avenge his loss to Margarito in a rematch last December when the fight was stopped due to swelling and damage to Margarito's eyes. During the course of his career Cotto has faced and fought the best, including  Zab Judah, Sugar Shane Mosley, Ricardo Mayorga, Joshua Clottey, Alfonso Gomez and many others

Austin Trout, fighting as a professional since 2005 is one boxing's newest and freshest face. Trained by  New Mexico native and former boxer Louie Burke his entire amateur and professional career, he is well prepared for whatever awaits him this Saturday night in his fight with Miguel Cotto. Much has been written since the fight was signed about Madison Square Garden and New York  in general, being Cotto's home turf, but Trout has been there before, winning the title in Guadalajara, Mexico with a hard fought 12 round unanimous decision against tough Mexican Rigoberto Alvarez (older brother of Saul Alvarez), and then held his first title defense in San Luis Potosi, Mexico against native Mexican David Lopez. Trout has entered the lion's den before. The concept is nothing new to him.

Still, Trout will need all his focus and confidence to beat Cotto. No easy task but definitely doable. Trout has never lost a fight. He holds the title. He has the height and hand speed advantage and he has youth on his side. He is a good defensive fighter. If it becomes a battle of attrition I have to believe that the man who has been beaten thrice will have a harder time digging deep.

All that of course means absolutely nothing. Each man will fight for his own destiny and future. Nothing that you or I believe will change anything. It's up to them. Me? I'm going with Austin Trout. I think that Miguel Cotto will bring out the very best in Austin Trout. Look for a good hard fought 12 rounds.
By Randy De La O at November 30, 2012

You sure called that one.

Cool blog. Do you have any boxing information nevada?