Austin Trout vs Canelo Alvarez: Alvarez wins a 12 Round Decision

Kudos to both Austin Trout and Saul “Canelo” Alvarez for putting on a good show at the Alamodome in San Antonio, Texas, Saturday night. Both guys show class and heart during the fight, especially Trout after getting caught with a right hand and knocked down during the seventh round. He was hurt but to his credit he was immediately back in the fight and in my eyes, won the rest of the round. Alvarez, for his part, showed some resolve in the fight. I don't think he won the fight but he did better than I thought he would. 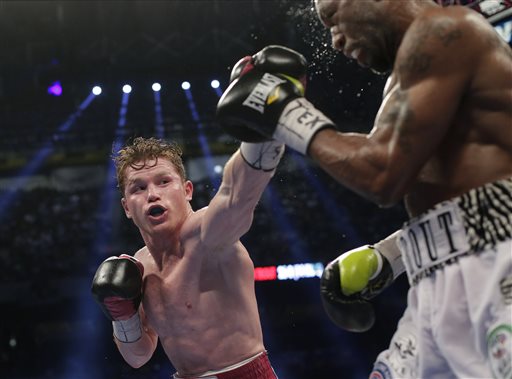 Overall, I thought Trout outworked and out hustled Canelo for most of the fight. Watching the fight I had the feeling that the onus was on Trout to take the fight to Alvarez. Both fighters were champions going in but I think that Trout was given the role of a contender and therefore had to take the fight to Alvarez and win convincingly, he had to take the title, so to speak or the fight was going to go to Alvarez. That's not to say that it was a robbery. It was a close fight and many of the rounds were hard to judge. I just happen to think the wrong guy got the win. Speaking of judging, what fight was judge Stanley Christodoulou watching? He scored the fight an atrocious 109-118 in favor of Alvarez.

Both Trout and Alvarez showed good sportsmanship after the fight. Though he he clearly believed he won the fight, Alvarez did not gloat or boast and Trout accepted the judges decision with class.

Will there be a rematch? I hope so. It's my guess that Canelo Alvarez will not want to face Austin Trout again any time soon. Why would he risk it?

As for Austin? We have not seen the last of him. You can't keep a good man down and he will be back. You can take that to the bank!!

Also, look to see more of Omar Figueroa who looked spectacular in the short time we saw him, knocking out the undefeated Abner Cotto of Puerto Rico in the first round. Smart, articulate and charismatic, he handled himself well inside the ring and in his interview.
By Randy De La O at April 21, 2013

I had a good pa;l who was as much of a boxing fan as I was. He always said, "The only way for a fight to end is by KO." When they go to a decision many times there is a big difference of opinion. It is easy to see why Stanley christodoulou had it 109 to 118 for Alvarez. He gave all those close rounds to Alvarez. Have you ever watched a real close fight two or three times? SYou can come up with a different decision each time. Maybe he next time these two fight Alvarez will win by Ko.