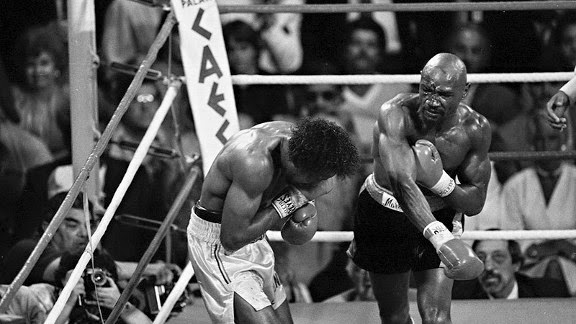 It is inconceivable to me that it has been thirty years since Marvin Hagler and Tommy Hearns got it on at the outdoor arena at Caesars Palace. Thirty years is a long time in anybody's book. Seems like yesterday.

In a decade that produced so many great fighters and fights, the three round battle between Hagler and Hearns, stands as the defining moment for boxing in the 1980's. In a decade that produced battles between Roberto Duran and Sugar Ray Leonard, Sugar Ray Leonard and Tommy Hearns, Alexis Arguello and Aaron Pryor, Frankie Duarte and Alberto Davila, Julio Cesar Chavez and Edwin Rosario, Mike Tyson vs anybody and so many more, this is the one that tells us more about the decade that was the 1980's than any other fight.
,
Yet, this is also representative of what we had to look forward to when we called up family and friends to come on over and watch the fights. We took all this for granted but we enjoyed the hell out of it! Mayweather and Paquiao? Forget about it!! No, really, forget about it! The battle of the Century? Forget about it!

Going into the fight, the measuring stick between the two fighters was Roberto Duran. Duran had fought Hagler to a virtual standstill but lost the decision in a great tactical fight in November of 1983. Seven months later, Hearns would knock out Duran in the second round in devastating fashion. The natural conclusion by many was that Hearns was going to do the same to Hagler. It's been thirty years since the fight so I don't think I'm spoiling it for anyone when I say that Hagler would have none of that! This was not only the defining fight of the 1980's but it was the defining fight of Hagler's career. This fight cemented his legacy with the knockout in the third round of Hearns.

It was an unforgettable night at home. Everyone at the edge of their seats. Knowing, deep down that we were seeing something special. Today, thirty years later, it is still the standard by which I, and many of my generation, continue to judge fights.