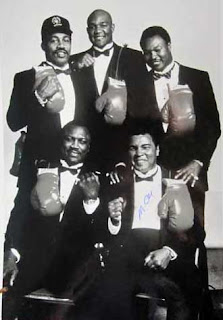 I am still trying to wrap my head around the fact that I woke up this morning to a world without Muhammad Ali. Ali, like Joe Frazier and my own father was a large part of why I fell in love with the sport of boxing. Although he had been made silent years ago, it is still hard to believe that the “Mouth that roared” will roar no more.

I was six when Cassius Clay - as he was known then – won the Gold Medal at the Olympic Games in Rome, Italy in 1960. I was nine when he took the heavyweight title from Sonny Liston. He captured this boy's heart from the get go! I was never able to shake the belief that there something magical about this man. That he was no mere mortal.. Even as an adult I still look at him through a young boy's eyes. I think it was the same for all of us that came of age during the 1960's.

Ali had his own particular (and spectacular) style; he backed away from punches, he flicked his jab and he often crossed his legs. He did so many things wrong, a fact acknowledged by his late, great trainer Angelo Dundee, who once said, “Muhammad does everything wrong but he does it better than anyone else”. Ali's greatest weapons were his mind, his indomitable will, and a speed of hand and feet never before seen in the heavyweight division, The Ali Shuffle served as a distraction for his foes, maybe a way to break down their will but more than anything it was for his fans. Was there ever anything more beautiful?

In the days when giants still roamed the Earth, and the heavyweight division was thick with competition, it was the self proclaimed “Greatest” that was King. Ali was a true champion and a true world champion taking his show to all corner of the planet and ducking no one.

Ali fought them all in an era where even the contenders have become legends. Ali was one half of the two greatest heavyweights championship battles of all time, the other half of course, being Smokin' Joe Frazier, when they battled for heavyweight supremacy on March 8, 1971, in “The Fight of the Century” at New York's legendary Madison Square Garden. Frazier got the nod in this fight between the two undefeated heavyweight champions. Ali would avenge himself a few years later, on October 1, 1975, when after a terrific battle in the “Thrilla in Manilla” trainer Eddie Futch stopped the fight before the start of the 15th round. Neither fighter was ever quite the same after this fight.

On those days when the losses came, he showed the world how a true champion loses; he did not blame his trainer, he did not complain, he made no excuses went back into training and always found a way back and for the most part always won the rematch. He was a true champion and even more, he was a man.
Ali was a boxer but he was so much more, a fighter against social injustice and civil rights, a man who took a stand against the war in Viet Nam. Consequences be damned he stood his ground on those things he believed in.

On a personal note: Sometime in 1991 I was reading the book section of the Los Angeles Times when I saw a notice that Muhammad Ali and Thomas Hauser were going to be at the Book Soup in Hollywood. They would be promoting Hauser's book “Muhammad Ali: His life and times. When the day came I got up early and told the family, “Let's go, we're meeting Muhammad Ali today!”

We were the at 6:00am. The store was closed, the street was deserted and I didn't care. I wasn't taking any chances. This is something I don't normally do but this was Ali.

Little by little the crowd grew until it was in the thousands, although I didn't personally count them. I was told! It was around noon or so when a limo pulled up and Ali got out of the car. It was silent. He looked at the crowd. He was in the early stages of Parkinson’s and he was not speaking. Without a thought I yelled out “Ali!” I repeated it until it became a chant and then the entire crowd began to chant his name with me. He pointed at me and smiled then he walked through the door and into the store. I was beside myself.

About a half hour later they let us in. We were led to the back of the store where Ali and Thomas Hauser were sitting behind a tall counter. I put my book on the counter top and Hauser placed a small sticker with Ali's signature on the book and handed it back to me.

I did not want to seem unappreciative and presumptuous but I said “Would it be alright if he signed my book personally? Hauser gave me a quick “No, if you want a personal autograph you'll have to go to the end of the line! He seemed bothered by me.

I decided to ignore him and speak directly to Ali. “Mr. Ali, I'm the first one in line. My family got here at six in the morning just for you. I would like for you to autograph the book for me if you wouldn't mind. I put the book in front of him. He still had not spoken. Hauser started to shove the book back to me, and by now it was clear that he was irritated with me and just wanted to move on. Ali placed his hand on Hauser's and shook his head. He took the pen from my hand and signed my book. He stood up, reached over the counter and gave my wife and daughters a hug and kiss. He shook my son's hand and mine.

I gave my wife the camera and pointed to my chin and said to Ali “Plant one here Champ!! He made that famous grimace, biting his bottom lip and tapped my chin with his right hand. I turned to my wife and said, “Did you get it? She said “No, just as I was going to take the picture a reporter from the Daily News started talking to me and when I turned back it was all over. It broke my heart but I wasn't going to ask him to do it again. We said our goodbyes to the champ and left the store. We will never forget the day we all met Muhammad Ali.

Muhammad Ali belongs to history now. He was an original. I can say with absolute certainty that there will never another like him. Our family extends our sincerest condolences to the Ali family. Rest in Peace Champ, and please don't start up anything with Joe!
By Randy De La O at June 04, 2016