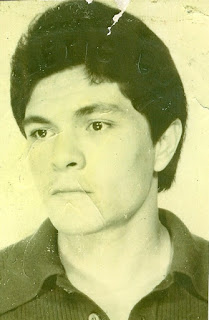 Forty years ago today, October 30, 1976, I fought my second and last fight. My opponent was Eduardo Barba of Mexico. I didn't plan for it to be my last fight but as the saying goes “Life happens”. I never had the boxing career that I wanted but I have no real regrets. God had other plans for me. I have my family and I had thirty six years with McDonnell Douglas and Boeing. I'm content. Still, I sometimes wonder. This is my memory of that fight.

My trainer Mel Epstein called me two weeks before the fight which was scheduled for October 30, 1976. "Randy, I got a fight for you if you want it. It's on the undercard of Mike Quarry and Tom Bethea. It'll be at the Aladdin Hotel in Las Vegas. It's going to be televised on "The Wide World of Sports". "Yeah, I want it!" I said. "The problem" Mel said to me "is he's a ten round fighter. His opponent pulled out and Howie (Steindler) mentioned your name. It'll be a six round fight. You don't have to take it if you don't want to".

I began sparring with Felipe Torres for the next two weeks, I sparred with other boxers but I spent more time with Felipe than anyone else. It was a grueling two weeks. I was in shape but I only had two weeks to prepare for the fight and I wanted to be ready. I ran five miles everyday. I felt good by the time the fight neared.

We flew to Las Vegas via TWA. It was a short trip. We took a shuttle or a cab to the hotel, I can't remember which. As soon as we entered the hotel it was a hub of activity. This was still the old Las Vegas. It was a different type of excitement. It seemed as if everyone from the fight game at that time was there. Eddie Futch, Ken Norton, Duane Bobick, Joey Giambra and of course Mike Quarry and Tom Bethea. There were many other fighters there but a lot of that day is a blur now. Mel knew everyone and introduced me to everyone. He introduced me to Joey Giambra and mentioned that he was going to be the referee for my fight. We had an early dinner and went up to our room for the night.

Early the next morning we went down for the weighin. Back in the day the weighins were done on the day of the fight. It was crowded and there was a lot of activity. I weighed in at 152. I was supposed to weigh 147. The guy that weighed me, whoever he was, said " Don't worry about it, Barba came in heavy too. I never did know what Barba weighed.

Later in the day I was sent to a dressing room and it just happened to be the same room as Joey Giambra, the referee for the fight. He was a very nice guy. I liked him immediately. He felt the same way. Before he went out the door he said "I like you kid, good luck tonight".

Mel brought in some guy to help him with the corner. I can't remember who he was for the life of me. He was a tall, somewhat heavy black guy that Mel knew. I wish I knew his name. I never saw him before or after. Whoever he was he was another nice guy that I met along the way. He wrapped my hands while Mel went over a few things. Mel could wrap hands well enough but he was generally too nervous and shaky.

Before I knew it I was making the walk to the ring. As I climbed onto the ring and went to my corner I saw Barba. he was staring directly at me. I wasn't sure what else to do so I stared back at him. What I remember most was his flat nose. His hair was long and Mel mentioned something about it to me.

This is how I remember the fight. The bell for the first round sounded and I had made up my mind I was going to box. I came forward and kept pumping my jab in his face. I knew he was more experienced but I wasn't worried. I felt confident. I was landing my right hand fairly easy. I was moving my head and kept moving forward. I felt like I was beating him to the punch. We exchanged several times and I felt like I got the best of him. I could hear Ken Norton in the background as he was announcing.

At about the end of the third round I started to tire but I sucked it up. In the fourth round things began to change. Not in a huge way but he seemed to be coming on. Still, I kept coming forward. My pride wouldn't let me do anything else. I wanted to win. I don't remember what round it was but it was during the last half of the fight when Barba landed a right hand to my solar plexus. It was like an explosion going off in my body. Suddenly it was like a bad nightmare. My body was racked in pain and everything in me said to lie down. I had no breath. I had nothing in me. I was desperate. For a moment I thought it was over. Honest to God, I willed myself to keep standing. I was not going to be knocked out.

I looked at Barba and It dawned on me he had no idea I was hurt. My plan was to move my nostrils slowly as if I was still breathing. I did my best to keep him from knowing. My face revealed nothing. Whenever he came forward I stuck my jab out. It was the jab that saved me. It bought me time to recover. It took the rest of the round to get my breath and clarity back. I was still trying to win in the next round but there was moment when I was against the ropes when my arms were so tired that they hurt more than the punches. I thought "What the hell" and I dropped my hands for about two seconds rest. he got a couple of shots in but they didn't really bother me. What did bother me was hearing Ken Norton say "It looks like Randy De La O (he pronounced it Deelayo) is getting tired. I remember thinking "Shit, it shows.

Things were pretty much going his way going into the sixth and last round. I remember several exchanges and I still kept pressing him. I was still doing my damnedest to win. Now the last round might not have looked pretty but I decided I was going to knock him out. I went after him. My arms were tired but I threw everything I had. I landed some and so did he. I might be wrong and maybe someday I'll see some footage of the fight but I remember him against the ropes as I was doing everything I could to knock that SOB out. I couldn't and didn't.

When the fight was over and before the announcer announced the winner, Mel said, "go over and shake his hand. He won the fight". The guy that was working the corner with Mel came up to me and with some emotion in his voice said to me "You gotta lot of heart kid, a lot of heart." He shook his head as he said it. Later Howie Steindler, almost verbatim and in the same, way said the same thing to me. I always wondered if it was because I got my ass kicked really bad or if i really did put up a great fight.

Now years later I wonder if I was just an opponent that was meant to fail. Maybe I surprised everyone by giving Barba a good fight.

On the flight back from Las Vegas, Mel and I were sitting quietly. I was disappointed that I didn't get the win. A man walked up to me and introduced himself to me as Alex Calderon, he was some exec with TWA, whose flight we were on. He said "Excuse me but weren't you one of the fighters that fought at the Aladdin?" I looked up, more embarrassed than anything else and said "Yes". He grabbed my hand and started to shake it with excitement. I was still confused because I had lost the fight. Suddenly he was no longer an executive for TWA but a fight fan. He told me what a great fight it was and that I had really fought a good fight. I didn't know what to say.

I was wearing sunglasses to hide my swollen left eye and just didn't want any attention but then he asked me for my autograph! I was shocked and to tell the truth I felt undeserving, I felt he was mistaking me for someone else. I looked at Mel and he said "Just sign it" he was smiling. So I signed it. Then Calderon says "Excuse me for one minute". Mel was laughing at my discomfort. The guy comes back with a wine bottle, along with all the stewardess' and stands next to me. I was completely unprepared for what he did next.

He said to everyone on board, "Excuse me, Ladies and gentleman, can I have your attention please? I want to introduce you to Randy De La O, he just fought a great fight at the Aladdin Hotel this weekend" He went on for a while, I can't remember everything he said because it was pretty much a blur. He then presented me with a wine bottle with a notation on it that read: "To Randy De La O, Good luck in the fight game". from Alex Calderon. I just remember everyone clapping and Mel saying to me, still laughing "Stand up and thank the people". So I did. I thanked everyone. I can tell you after that the flight home was a lot easier to bear.

Sometimes in life we have to take our victories as they come. I learned that day that win, lose or draw that I had the right stuff. I learned that I was capable of doing something that most men wouldn't do. It was just one ingredient in my life's learning process, there would be many, but it was a vital one and one that I am proud of. Sometimes a loss is a victory in disguise.
By Randy De La O at October 30, 2016

This is a great and modest story. Thanks for sharing. Although there is more to boxing than violence, I feel that the violence factor does have a big impact on our lives and like you said, you have a family and kids to care for.

Thank you for this personal story. It demonstrates the feelings of those of us who are simply fans of boxing. We, or at least I, respect and admire both of the fighters in the ring, often the fighter who came away with a loss more than the winner. As to the violence, I grew up watching the fights on television with my grandfather in the 1950s and it didn't lead me to a violent life.

This is a great blog,thanks for sharing.
gclub casino
goldenslot
Gclub จีคลับ