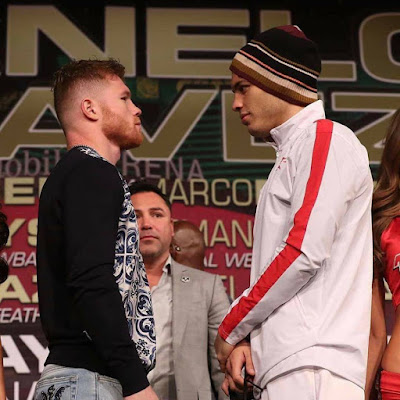 Does Size Matter?
Maybe, and maybe not. Sometimes the size of a fighter's heart can over come almost any obstacle, including size.
I've seen Saul “Canelo: Alvarez” frustrated but I've never seen him quit, on the other hand I have seen the chink in Julio Cesar Chavez Jr.'s armor when he fought Andzej Fofara, quitting on his stool after being knocked down in the 9th round. Not exactly an unforgivable act but it is an indicator.
I admit I am not a (true) fan of either fighter, at their age they should have already made their definitive mark on boxing. The biggest thing Canelo has going on his resume is that he is Oscar De La Hoya's fighter (and that may or may not be a good thing), for Chavez Jr. it's being the son of a legend. Would they be where they are without that. I can't really say. In some ways this may just be an extension of the Chavez – De La Hoya rivalry.
I believe this fight will be judged not on size but on attrition and the ability to handle adversity. The fighter that can impose his will on the other will win the fight. Each man has something to prove. Both men want to establish their greatness.
I'm going out on a limb, I know, but I'm picking Canelo by 12 round decision. Still and all, may the best man win, and may we finally see a career defining fight by both fighters!
By Randy De La O at May 05, 2017

I think it will be an interesting match as both players have a lot to prove. And as far as size is concerned, in sport size does play a part but strategy matters too.

Size does not matter usually but sometimes it does. If the difference is not big and the muscles of the fighter are strong as well as the will power and mind then size obviously does not matter.

I am really enjoying reading your well written Information. It's amazing site webstagram to read many great blogs on instagram, please go to site