Filming at the Olympic Auditorium . . . 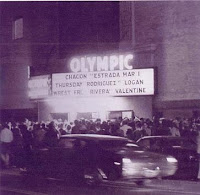 Think back to all the boxing related movies or TV productions you have watched where you find yourself inside L.A.'s Olympic Auditorium. During my years as a film technician, I've worked on several, however, the one that comes to mind was the first, a 1979 production of a TV movie called "The Contender".

The production was an unbelieveable boxing tale starring a needle-nosed actor named Marc Singer. The cheesy script was bad enough, but no man in history with a long, thin, perfectly-pointed nose like Singer's competed in a prize ring. If they did, the nose would immediatly be rearranged, regardless of the boxer's defensive skills.

We shot all over town, at the Main Street Gym, on stage at Universal, the old San Bernardino Arena, a brick structure sitting so close to the railroad tracks that the place felt like an earthquake was happening whenever a freight train rolled by.

When our production rolled into the Olympic, I was on the crew. I was part of the rigging crew that laid in all the cable for the production lighting equipment. I was up and down into the arena and the balcony area. We had big units burning up high, providing a strong back-crosslight for the ring from the edge of the balcony.

While up in that balcony, I had a chance to see the Olympic in ways I'd never before. I had the freedom to go anywhere in the building I wanted, so I went to a place that had always caught my eye and interest. I went high into the rafters, way above the ring below covered with it's powder blue canvas. High above the balcony seats, directly above the ring, that place where the microphone would drop down from, directly into the hand of ring announcer, Jimmy Lennon. Sr. That's where I was.

The microphone cable reel was still there at the time. In later years, I would see that it had been stripped and was left a rusting piece of metal, not worth the bother of removing. This was after the "wireless mike" had come tp replace the need for a cable system that was attached to a big, heavy micorophone. In later years, Olympic Auditorium ring announcers would have a small wireless mike and would stick it in their jacket pocket after using.

While up high in the Olympic, I discovered gigantic windows covered with sheet metal. These gigantic windows provided ventilation for cigar and cigarette smoke in the 18th & Grand arena's early days. They could just roll up the metal covers and clear the air.

Of course, I took time to look around and try to think of every great boxer who had fought there. How many had died there? I myself would see two more die in that building within the next three years (Johnny Owen & Kiko Bejines). I tried to picture May West and George Raft sitting ringside, and I could remember seeing Mickey Cohen ringside at a couple of my own fights. Bogart was a big fan, and Lauren Bacall told me years ago that she and Bogie often were ringside at the Olympic and Hollywood Legion. I thought of Aileen Eaton, Cal, Jackie McCoy, Davies, Chargin, Fraser, Parnassus, Suey Welch, Tom Kennedy, Babe McCoy . . . were their ghosts close by? In my mind, if nowhere else.

I thought of the real "Golden Boy", and of course, I remembered Mando Ramos. He wasn't such a distant memory in those days, and to be honest, Mando Ramos has never been a "distant memory", never will be. Mando Ramos made a life long impression on me. Mando Ramos and the Olympic Auditorium walk hand-in-hand thru my mental notebook.

I looked down, envisioned some early moments in my boxing history. Watching Danny Valdez and Petey Gonzalez slug it out in one of my earliest thursday night visits. I remember how I wish I had been up there with a movie camera to film the 1964 riot that took place after Hiroyuki Ebihara got the nod over Alacran Torres in a flyweight title fight. The Mexicans wren't happy with the decision. The floor was no place to be. Objects would fly hard from that balcony. Even the coins that often would shower the ring after a good fight would hurt like hell if they bounced off your skull, especially ones that fans whipped down from the balcony. Jimmy Lennon used to have scars on his forehead and hairline from quater sized missles. Part of the game for fans was making Jimmy a target.

When you are up high in the building, where only maintenance crews work, you see the real age of the old gal. You see the vericose veins on the upper, out-of-site walls that haven't seen a drop of paint since the place opened in 1926. It was here that the old broad could be seen without her make-up. It was her secret, just her's and that rats that walk the beams, and travel close to the walls, where their droppings litter the perimeter. It's a place where you find dust older than your father's first automobile.

I tried to imagine how it was up there on the day it opened. I remembered the photo I saw of Jack Dempsey breaking ground for the building when it first underwent contruction. It would serve as the boxing and wrestling venue for the 1932 Olympics, about a half dozen years after it's doors first opened.

So many memories and curiosities crossed my mind that day. Of all the interesting places the film industry would take me, one I appreciate most is the Olympic, where I was able to climb that creaky old ladder into the rafters.

Only in the film industry would that have been possible for me.
By Randy De La O at March 05, 2009

I am Johnny Flores' granddaughter and would love to connect with Mr. Farris. Here is my email address- aabarba@yahoo.com I want to collect as many memories as I can for a family project. Thanks! Arron

Hi all, I'm looking for a video of a fight at the Olympic May 19, 1966. Joe Fraiser vs Chuck Leslie. I was on the undercard and would love to find a copy of that show. Any ideas appreciated. Thanks Ron, AKA GoGo Kid. whasupwityou@verizon.net

Hello, I am looking for a video of a fight at the Olympic Auditorium as well May 31,1979. The fight was between Jorge Labrada and Dave Portillo(me). If anyone knows how I could get a copy of the film or any paper write ups on the fight, please let me know. Thanks Dave. portillodavid54@yahoo.com

I am seeking any boxing videos of my father Garfield C. Coleman, a middleweight, who boxed from 1941 THRU 1953 at the Olympic Auditorum. He passed away in 1987 and it's very important that his descendants see him in the ring. Thanks! bettyjcoleman@gmail.com

Looking for a fight with Frenchy Renee & Art Aragon, march or may 1943. For family history. Thank you in advance