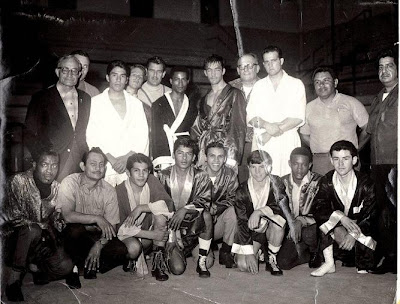 "As this photo was taken, the Quarry family, and the family of Mike Quarry's opponent, James Dick, were involved in a little disagreement at ringside. It was settled by the riot squad of the El Monte Police Dept". ....Rick Farris

When Irish Eyes Are Smiling . . .
I can be seen in the photo with the rest of our AAU Team for 1969, however, Frank was also there.
As the photographer snapped photos, the team and Frank Baltazar (off camera) enjoyed the safety of the ring.

There was big trouble brewing at ringside.
A Quarry won the last bout. Mike got the nod over a Hillbilly, and the Clampett family wasn't happy.
Lots of things being thrown at ringside- punches, purses, cups of beer, men rolling around the ground in head locks.
A woman's wig suddenly flys thru the air like a platinum pigeon, a cherry bomb explodes.
The majority of the battle is being waged by the women, lots of biting, scratching and kicking. Somebody gets stabbed.

Ma Quarry is brought in to settle the mess, she's wearing high-heels for the first time ever and she ain't happy.
Hard enough to walk in the damn things, now she's gotta fight in them.
A moment later the two old broads are on the ground, Ma Quarry vs. Granny Clampett.
The Riot Squad bursts in, pulls the men apart and cuffs them.
Elly May is maced before she can level Wilma Quarry with a fold-up chair.

The riot squad sees that it's best to deal with the men first, and are slow to approach Ma Quarry as she pounds Granny.
Ma suddenly pins Granny Clampett and jumps to her feet.
A policeman attempts to cuff the mother of the world's #2 ranked heavyweight.

"Get your friggin hands off of me. Can't you see I am a lady?"

Without blinking an eye, the policeman replies, "Yes Mam."
He then moved away to deal with another suspect, brother Jimmy. The Quarry men aren't as dangerous as the women.