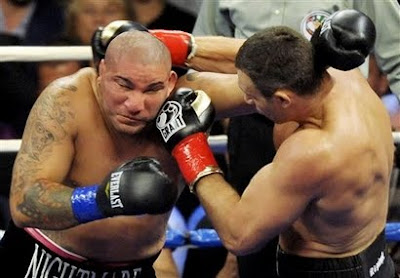 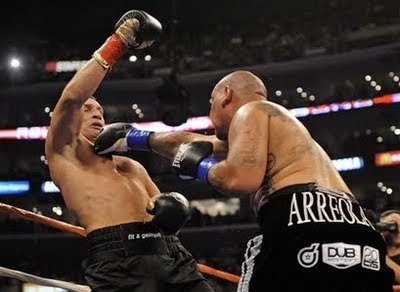 Last night's heavyweight fight, at the Staples Center in Los Angeles, between Vitali Klitschko and Chris Arreola was even more one sided than Mayweather vs Marquez, and like Juan Manuel Marquez, Chris Arreola showed a strong chin and a big heart but it just did not make a difference. Arreola fought a better fighter last night and there is no shame in that.

From the onset Klitschko used his long jab followed by the right hand and his awkward but effective right uppercut. Arreola didn't have a clue on how to get inside. Klitschko's side to side movement kept Arreola off balance and unable to get off a clean shot. He also kept Arreola at range and that sums up the whole fight. There were no dramatic rallies nor were there any surprises here. Kudos to Klitschko for sticking to his own game plan.

Let me say this though, If I wasn't a fan of Arreola before this fight (in all honesty I was lukewarm at best) I am now but I am more a fan of Arreola the man more so than Arreola the fighter. He showed grit last night. I don't know if Arreola will ever be good enough to beat Klischko or any other champion, that will be up to him and how he decides to tackle the rest of his career.

During an interview prior to the fight Arreola said this "If Michael Phelps can smoke why can't I drink?" I couldn't help remarking to my wife Jeri that "He'll find out why tonight" I hope for his sake he got the message. There was another Chicano heavyweight that fought back in the 70's and 80's - Eddie "Animal" Lopez that loved his beer and he threw away his career. Forget the beer Chris, you can live without it. If you ever want to be the best you will have to become Spartan in your lifestyle. Arreola learned a valuable lesson in humility last night and it's my belief that it will make him a better fighter than he was before he stepped into the ring with Klitschko.

So why am I a fan of Arreola now that he has lost? Because of all the qualities that I admire most in a fighter, A big heart stands heads and shoulder above the rest. When all is said and done - win, lose or draw - it is the heart we remember when years later we look back at a fighters career. It's what touches us. It gets inside of us. When a man stops fighting in the ring it's his heart that will carry him through whatever he faces next. Arreola wept openly last night feeling as if he disappointed all his Mexican and Mexican American fans. He needn't worry. We know he didn't quit. It's my guess that he has more fans today than he did yesterday.
By Randy De La O at September 27, 2009

It amazes me how Vitali can nuetralize his opponent exclusively using "arm punches." Can you imagine if he put his body weight into that right hand every time? It's a scary thought...

I was impressed with Arreola's heart and resolve, but was suprised how few right hands he threw. The overhand right is Arreola's money punch, just like Marquez's uppercuts, and we barely saw either in their respective fights. Arreola showed grit and heart for taking that kind of beating for 10 rounds and marching forward, but he didn't follow the gameplan he mapped out at all: take the beating to get inside and land the right.

I could tell Vitali was pressured more than usual, and he was forced to throw and side-step like never before. But Arreola didn't seem able to put the confidence we saw glimpses of behind his punches.

And finally, I'm going outside the mold and saying that the Klitschko brothers are good for the heavyweight division. They are intelligent, respectful men of class. It makes David Haye look all the more foolish after his actions, seeing a gracious Vitali tell the Staples Center, "Cris will be heavyweight champion someday...just not today."