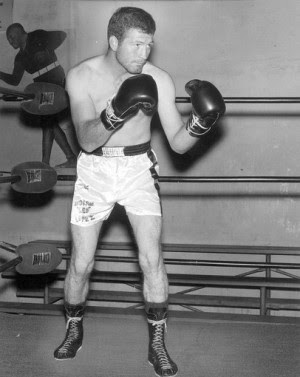 Ernie "Indian Red" Lopez, a popular boxer in the 1960s and '70s who twice lost title fights before sellout crowds at the Forum and was found in a Texas homeless shelter just in time to be honored for his accomplishments in the ring, has died. He was 64.

Lopez died Saturday in Pleasant Grove, Utah, from complications of dementia, said one of his sisters, Naomi Adams. He had lived with Adams' family for five years before recently moving into a rest home, she said.

"He never became a champion, but he was very popular with the fans," said Bill Caplan, longtime Los Angeles boxing publicist. "He was aggressive; he didn't worry about getting hit."

Lopez fought for the welterweight title twice against Jose Napoles, losing in the 15th round in 1970 and in the seventh round in 1973. "He was a very good fighter, but Napoles was a great fighter," Kaplan said.

"Lopez was a warrior," actor Ryan O'Neal, who managed Lewis when he fought Lopez, said in 2004. "He was also a gentleman, a decent man. But as a fighter, Lopez would hit the other guy so much he would become exhausted. Because of that, Lopez would always fill an arena, because he would give fans their money's worth. . . . It was his heart that made him win."

By 1974, Lopez was divorced and his career was over. His connections to his family decreased as the years went by.

"It was the losses to Napoles and the divorce that sent Ernie into a tailspin," his brother, former featherweight champion Danny Lopez, said in 2004. "He was a hurt man."

That year, family members saw an item in The Times about Lopez being named to the California Boxing Hall of Fame, and they tried to find him. A Los Angeles police detective tracked down the former boxer in a Fort Worth homeless shelter.

Don Fraser, president of the California Boxing Hall of Fame and a retired boxing promoter, paid for Lopez's flight to Los Angeles. "Some of the guys got him a suit and a hat," he said. "To him it was really something. I think he was overwhelmed."

Lopez was born in 1945, on a Ute Indian reservation in Fort Duchesne, Utah, one of eight children. He met his former wife, Marcia Park, when they were students at Orem High School in Orem, Utah. They moved to California in the mid-1960s, and he fought most of his career out of Los Angeles' Main Street Gym.

Lopez is survived by his son, Lance, and daughters Cindy, Kami and Tracy, three brothers and two sisters, 22 grandchildren and one great-grandchild. Services will be Saturday in Utah.