MANDO RAMOS: Still Punchin’, After All These Years!

MANDO RAMOS:
Still Punchin’, After All These Years! 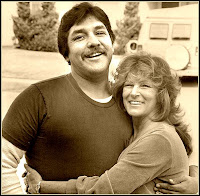 It is highly unlikely that The Mando Ramos Story will be made into a movie.  Reason:  It has already been done—a hundred times or more.  The script is just too, too familiar, to anyone who has ever sat through a Hollywood “B” movie dealing with boxing.  Check it out, to see if even one cliché is missing:

Poor Latino kid, tired of being pushed around by neighborhood bullies, lashes out and flattens one.  Then another, and another.  He has magic in his fists.  His father takes him to the neighborhood boxing gym, where a grizzled old trainer recognizes his talent and refines it, over the course of several years, until the kid, at age 16, is whacking the daylights out of main-event professionals in gym sparring sessions.

The kid breaks away from the old trainer, and hooks up with a hot-shot manager who has “connections.”  He lies about his age, gets a pro license, and starts whipping everything in sight. The promoter loves him, and so do the fans.  He goes straight to the top—becoming the youngest man ever to win the world lightweight title.  The money rolls in, and it is widely predicted that he will be champion for as long as he wishes to be.  He marries a beautiful and virtuous girl from a good family, buys a home, and settles down—for about fifteen minutes.

Along the way, he has picked up a lot of new friends—a few of them good people, who will stick by him—but a lot of them bad people, with bad habits, who are only too eager to help the young champ spend his money.   From that point on, his fortunes take a downward turn.  A hidden alcohol-abuse problem that began when the kid was a pre-teen is suddenly an unmanageable thing—complicated by frequent use of marijuana and various pills—uppers, downers, and in-betweeners.   His marriage falls apart, but he goes on fighting at a world-class level, hiding his substance-abuse problem from the press, the public, and even his management team.

All too soon, the destructive lifestyle does him in.  He becomes the youngest man ever to LOSE the world lightweight title; and he loses other fights, to guys he should handle easily.  He begins shooting heroin, with his brother—and wakes up one morning to find his brother foaming at the mouth, dead from an overdose.   He hits absolute rock-bottom when he is starched in two rounds in Las Vegas, by a complete bum.  Still in his mid-twenties, he is finished as a boxer and, to all appearances, as a human being.  His fair-weather friends, many of whom owe him money, have all disappeared.

And then, miraculously, an angel enters the picture.  She is a lovely blonde, named Sylvia.  She finds him sleeping in an abandoned car, covered in filth, babbling incoherently when he tries to talk.   And slowly, with a rare combination of patience, understanding, and tough love, she nurses him back to physical and mental health.  She guides him into Alcoholics Anonymous, and he soon finds himself helping others deal with their addictions.

So you see why the story would never work as a screenplay.  It has been done too many times.  But the twist is that this time, the story is completely true.  Armando Ramos, the kid who had everything and lost it all, has come back—all the way to respectability, and much more.  He is now a retired longshoreman, living with Sylvia, his wife of 30 years, in a beautiful home on a hill overlooking San Pedro, California.   In spite of a chronic problem with his back that necessitated recent surgery, he is still a battler.  The big thing in his life today—aside from Sylvia, and his son Mando, Jr. and his four grandchildren—is the organization that he founded, called BAAD (Boxing  Against Alcohol and Drugs).

No longer a lightweight, but still looking good at a not-so-svelte 250 pounds, the champ carries his message to kids in schools and churches and youth groups whenever and wherever invited, speaking out against substance abuse in all its forms.  He would like to see boxing reinstated as an interscholastic sport.  And, above all, he is pushing to have sanctioning bodies everywhere (WBA, WBC, WBO, IBF, etc., and all state athletic commissions) require of boxers that before they are licensed to box professionally, they must enter some kind of vocational training program to prepare them for life after their ring career has run its course.

“Too many guys,” says the former champ, “spend ten or fifteen years in the ring, and walk away with nothing, and no skill to fall back on.  If they knew how to work construction, or drive a truck, or be a mechanic or a plumber or something like that, it would make all the difference in the world.  A guy can’t go on fighting forever; and the reason a lot of them stay in the ring too long is because they don’t know how to do anything else.”

The BAAD Harbor Boxing Club is located at 1505 Pacific Avenue, in San Pedro.  It is open from approximately 12 noon til 7 p.m., Monday thru Friday, with Mando’s partner, Alex Martinez, sharing the management and physical instruction duties.  A fund-raiser, featuring amateur boxers from the Harbor Area, will be held at the club on Saturday, July 3.