MIKE NIXON; SO CLOSE BUT YET SO FAR... 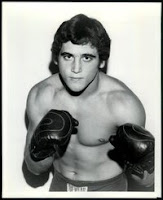 If a fighter had " future champ " stamped on his forehead, Mike Nixon did. He was a smooth boxer with a good punch. He had solid skills and a lot of heart. He was a real crowd pleaser. For all the attributes Mike had he lacked one thing...The ability to take a good punch. He was stopped six times in his thirty seven bout career. In fact he stopped in three rounds by Larry Davis in his pro debut in 1970. Mike was a raw eighteen year old kid at the time and he showed the grit and determination to come back and win thirteen in a row. In 1971 he was halted in nine by George Davis. In 1972 he was kayoed twice by Art Davis. Mike learned to stay away from guys with the last name of Davis.

Mike would reel off eight victories in a row plus a ninth round no contest against the rated David Love in 1974. In 1975 he lost a decision to Olympic Gold Medal winner Sugar Ray Seales. He then scored an upset points verdict over future light heavyweight champion, Mike Rossman. The rematch produced one of the most devastating knockouts I've ever seen. In the seventh round of a close and competitive fight, Rossman launched a right hand that landed like a guided missile on Nixon's jaw. Need I say " lights out " ? It was one of the hardest punches I've ever seen landed.

Nixon would return and in 1976 he lost in ten to clever Tony Licata. Then in a stunning upset Mike stopped the highly touted South African Gert Steyn in five rounds. Nixon was now back in the thick of the middleweight picture. In 1977 Nixon was matched with the rough and tumble Vito Antuofermo. Vito, who was on his way to the world's middleweight championship ended Mike's dream in the fourth round. That was Nixon's last fight. He retired with a very respectable 27-8-1 record. During his career he gained some acclaim as the Jerry and Mike Quarry's brother-in-law. Nixon though cut his own path through the ratings and although he did not reach the top, he did mix with some of the best.
By Randy De La O at October 30, 2010