Last night was the first time I've seen Abner Mares fight. The kid is unbelievable. In the first fight of Showtime's Bantamweight Tournament, taking place at the Emerald Queen Casino in Tacoma, Washington, Mares beat Vic Darchinyan in a absolutely thrilling battle. It was no easy task for Mares who fought through adversity from the onset, including a clash of heads that resulted in  a large gash above the left eye, on the hairline, a flash knockdown in the second round, a point taken away for a low blow, and an incompetent referee that allowed Darchinyan to get away with several fouls during the fight. Several of the low blows were cause by Darchinyan who continually pulled Mares head down.

Darchinyan, ever the bully met someone who refused to be bullied. Mares took the fight to Darchinyan like a seasoned veteran and imposed his will and heart on Darchinyan, who for the first time displayed some good boxing ability. my guess is, he didn't have what it takes to stand up to Mares. Mares fought with a Chavez like determination. There have been so many great fights over the last couple of months. No one has impressed me like Abner Mares.

I can honestly say that I have never liked Vic Darchinyan. I think he is an arrogant loudmouth but you can add cry baby to the list now. I thought Pernell Whitaker was a whiner back in the day but this guy takes the cake. He blamed his loss on referee Bobby Howard, the same referee who let him get away with everything during the fight and took a point away from Mares. Darchinyan liked to boast that no Mexican could beat him, well, last night he got his ass whupped good, by a Mexican. I love it when justice is served. Mares won a split decision. 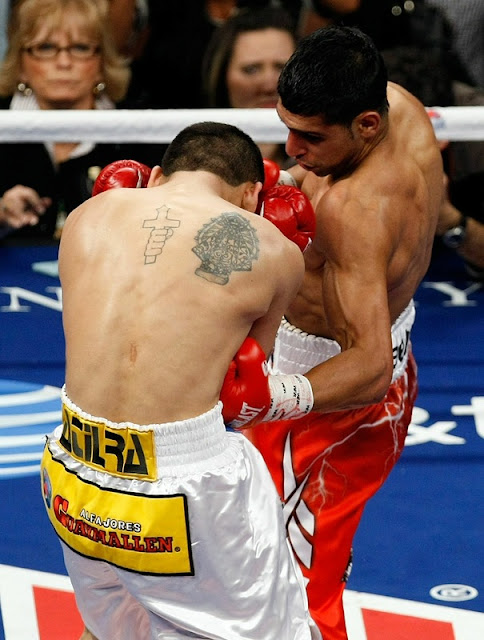 Over at HBO, at the Mandalay Bay Casino, Las Vegas, there were two contrasting fights. In the first fight there were no surprises, as  Victor Ortiz, trying hard to erase the memory of his "fight: with Marcos Maidana, took a half step back in a dismal showing against Lamont Peterson. They fought to a draw. The less said about the fight, the better.

It didn't take much for Amir Kahn and Marcos Maidana to erase the memory of the Ortiz-Peterson fight. In the beginning seconds of the fight Kahn caught Maidana with two crisp body shots and dropped and for a minute it looked like it was over for Maidana. With intestinal fortitude that is the trademark of Argentine fighters battled his way back into the fight, to make things worse, he also had to battle Joe Cortez, who continually nagged at him and took a point away from him when his elbow connected with Cortez' chest. There was no merit for the point deduction. 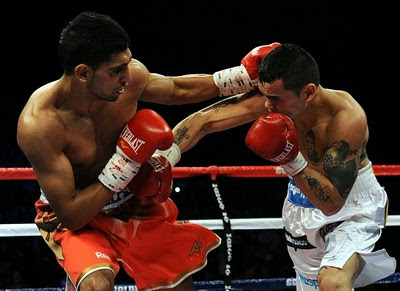 Kahn for his part was following his game plan, using his speed and combinations but nothing would deter Maidana who was relentless in his pursuit of Kahn. In the middle rounds Maidana took control of the fight, almost stopping Kahn at one point, but Kahn, determined to prove that he had a sturdy chin fought on. Kahn had built an early lead but still it wasn't a sure bet going into the last round. I'm not 100% sure Kahn won that last round but he won their fight by unanimous decision. Both men proved their mettle last night.

I missed Mares-Darchinyan;I haven't
seen Darchinyan since pre-Nonito
Donaire-and I wasn't surprised that
Donaire took him apart...but I did
catch Khan-Maiddana;I new it would be a war..

Gervonta Davis will be defending his title in February. Follow this guide to watch Gervonta Davis vs Abner Mares live stream from anywhere in the world.