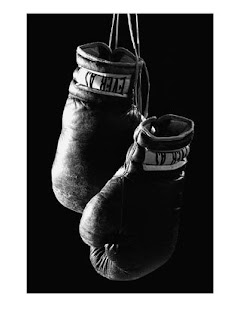 
In the days leading up to the fight he heard the talk. “He won't make it to the second round” “He doesn't stand a chance, the bum”. “He has no heart” said another.

Thirty-nine years of age, fifty-nine fights, losing half and stopped in most Still he fought on. It was all he knew. At the weigh in, he stepped on the scales. No more cheers for this tired old fighter. The crowd snickered and the press ignored him. His best days were a decade ago.

Once, he was an up and comer but then came the losses, then the ridicule and then the moniker “Bum”. Now he fought only to survive. He stepped back from the scale. Watched as his opponent was weighed. Lean, sinewy and young. The crowd roared their approval. “You'll kill the bum, kid, he's got no heart”.

It's the morning of the fight now, your wife and kids watching as you get your gear together. You look into their eyes and you see yourself as they see you, and you begin to believe again. “Maybe, you think to yourself, just maybe.”

You are alone with your trainer in your dressing room. The days when your room was filled with the press, the boxing crowd, leeches and beautiful chaos is long gone. No one cares anymore. The world loves a winner.

You can hear the roar of the crowd from your room. Another knockout. Another bum knocked into oblivion, and another up and coming fighter moving up the rankings.

You hear your name called. It's time to make the ring walk. You look at your cornerman and he says to you, “Just do your best son, just do your best. He's young and strong, don't get careless”. You smile and begin your walk.

You step into the ring, you hear the boos and you wait. You pace up and down the ring. Something you haven't done in a while. You are suddenly anxious. Feels like old times maybe. You look at your trainer and he smiles.

As the young opponent climbs into the ring the crowd roars it's approval and he prances around the ring. He looks at you and sneers and you think to yourself “What's he got that I ain't got?” You smile at him.

The introductions are made and the first round begins. Almost immediately his jab is in your face. You can't avoid it. He's fast. He backs you up and the crowd goes wild. “I'm okay” you tell yourself. It continues like that for the rest of the round. Jab, jab, right hand and an occasional left hook to the body. “Predictable” you think to yourself.

As the next round begins the kid throws two careless jabs and you follow them home with a right hand and a left hook and the kid goes down. He's never been down before, this kid, and panic sets in and he jumps up and goes crazy. You've been here before you remind yourself.

You look across the ring as you sit in the stool. You see the concern in the opposite corner. “Okay, I got their attention”. You look at your trainer and his eyes are lit up for the first time in years and he nods at you.

That this has become a test for the young contender becomes obvious. He comes out for the next round back in control of himself. He has recovered. He's quick, this kid, and he can bang but still you ain't going to quit on yourself!

Somewhere in the middle rounds a fight is taking place. For the first time in years you hear the crowd calling for you to win. You smile and remember how good it felt. For a brief moment you find yourself reaching back in time.

No one expected this fight, not the press, not the crowd, not even yourself. Then you remember your family. They know you, they believe in you, they dared to expect it, and you fight on.

It's the late rounds now. One eye is closed, blood is pouring from your nose but you are unbowed. “I will not quit!” you say to yourself, not quite sure if you are thinking it or speaking out loud.

You find yourself on the ropes, fatigue hurting you more than the punches. Your hands going down just for a second or two, and your young opponent takes full advantage, then you begin to punch.

You remember your old trainer telling you years ago “When you find yourself on the ropes or in the corner and you don't know what else to do, just punch, just punch your way out!” and so you punch.

It's the last round now. “Maybe I can knock him out” you think to yourself. You look him in the eye as the last round begins. This young, strong fighter shows something in his eyes that you didn't see earlier and you recognize it immediately. This young man has come to respect you!

Still his job is to fight and win. Several times in the round you find yourself against the ropes, punching, swinging at anything but never, ever lying down.

The bell signals the end of the final round. The crowd roars it's approval. You and your young opponent collapse onto each other, spent, tired and worn. You give each other a hug and you tell him “Great fight kid”, “Same to you old man” and you both walk back to your corners.

You didn't win this fight, you know that and you never fought again. You were never a champion. You were once a contender. It was enough. You found a job, you lived your life with your family and you were content.

Brian, there is a small piece of my life in that story. Glad you like it.