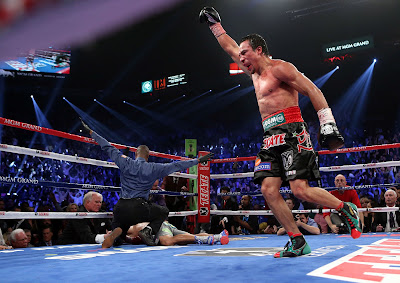 Last Saturday night, in a fight reminiscent of an earlier era in boxing, Juan Manuel Marquez  (39) and Manny Pacquiao (33), got it on and electrified the boxing world with their fight at the MGM Grand Arena, in Las Vegas, Nevada.  For six rounds they battled. Each man inflicting pain and damage on the other. No quarter asked, none given.

This was the fourth fight of their almost decade long rivalry that began back in 2004. Their first fight ended in a controversial draw, the second fight a split decision and the third fight a majority decision. Each fight more controversial and  more inconclusive than the last, and to some, more unjust. Regardless, both fighters took each other to a higher plane of existence each time they stepped into the ring to face each other. What ever we thought about who might have won their fights, or who did not, the one truth that remained, was that the difference between the two was razor thin. A hairsbreadth of a difference. They did not yet know it but they were creating a rivalry for the ages.

Going into the fight, both men had something to prove; to themselves, to each other and to the world. Both fighters believed they won their fights but I have to believe that with half the boxing world crying foul, and with Marquez continuing to claim himself the true winner of their battles, Pacquiao had to question himself, even if it was just the slightest bit. He wouldn't be human if he didn't.

Marquez, of course, had other ideas and reasons of his own as he prepared for the face off with his now bitter foe. Marquez was on a quest for redemption and revenge.  A man that believes he has been wronged will fight to  his last breath to correct that wrong. It doesn't matter if you or I believe it, Marquez believed it and that was all that really mattered. Marquez might not have used this quote, “Right makes might” but the concept was in his mind and in his heart. This gave him legs.

Marquez understood that if the fight went the distance he was never going to get the nod, that was a given. In his mind the only possible path to victory was a knockout. This is what he prepared himself for: The destruction of his nemesis. He would risk it all and endure it all. He left absolutely no room for failure. Both men were motivated but only one would succeed. There would be no draw, there would be no decision. Both fighters were equally adamant. Both men obsessed with victory over the other.

The first round began energetically, with Pacquiao (147 lbs) using more head movement than usual, and Marquez (143 lbs) patiently waiting to counter. As the rounds went on Marquez began to work the body of Pacquiao but certainly both men were causing damage to each other. Marquez, clearly the better technician of the two landed the cleaner, sharper punches, while Pacquiao, the quicker of the two, landed more.

In the third round, Marquez feinting a jab to Pacquiao, threw a hard overhand right that landed flush on the face of Manny Pacquiao, knocking him down. It was the first real sign that this night was going to be different, that it was going to be a special night. The fight was on.

As the rounds went on both Pacquiao and Marquez, refused to give an inch. There was no quit in either man. The crowd was getting their monies worth. The surprise here (to some) was Marquez. Most “experts”, sportswriter and the boxing world, believed this (supposedly) final fight between the two would establish Pacquiao's superiority once and for all, and vindicate his past victories.

In the fifth round Marquez was hit with the left hand and almost hit the canvass, as it was his glove touched the canvass and a knockdown was scored for Pacquiao, it was a good call and it evened up the fight again. Marquez quickly landed a hard right hand on Pacquiao. Pacquiao began his assault anew and near the end of the round Marquez found himself in trouble but continued to fight back. It was still anyone's fight.

The sixth round was more of the same with both fighters upping their game. There were several good exchanges between both fighters. With seconds left in the sixth round, as Pacquiao was throwing a right jab, and presumably  getting ready to let go of a straight left hand, Marquez moved in and caught Manny Pacquiao with right hand that dropped him like sniper fire. It was so unexpected it took a second or two to register. Just like that the fight was over. Marquez had won the fight in a way no one could have predicted. With this knockout Juan Manuel Marquez has established himself as the superior  fighter, and that is after all what this rivalry has been about. Not about titles and money, for these two it has been about victory over the other.

For a few seconds after the knockout, I along with everyone else on the planet, was concerned with Pacquiao's well being. I'm not going to lie. I was overjoyed. If you are a Marquez fan it just doesn't get any better than this. If you are a boxing fan it doesn't get any better than this. Marquez had finally slain his dragon. This victory and the way in which it happened was a shot in the arm for boxing.

It may have been the  right hand that dropped Manny Pacquiao but what won the fight for Marquez was his "Iron Will" , his cast iron chin, and mostly it was his determination and preparation.. In the fight of his life against Pacquiao, the fighter that many believed to be the greatest pound for pound fighter of his era, Juan Manuel Marquez made the stand of his life, and prevailed. And so what was once a razor thin difference, is no more.

On December 8, 2012, at 2:59 of the sixth round, the man previously known worldwide as the Mexicutioner had just been Mexicuted, .......worldwide.

I'd much rather watch Pacquiao-Marquez V than Pacquiao-Mayweather-and I gotta think they wanna do it again(hopefully,they're both okay).To Pacquiao's great credit(unlike Roger Mayweather-who gave himself the nickname-and it was a pleasure seeing Chavez flatten him twice because of it)Pacman doesn't dig the 'Mexicutioner' nickname;only a total nitwit could've come up with that term.

I'd much rather watch Pacquiao-Marquez V than Pacquiao-Mayweather-and I gotta think they wanna do it again(hopefully,they're both okay).To Pacquiao's great credit(unlike Roger Mayweather-who gave himself the nickname-and it was a pleasure seeing Chavez flatten him twice because of it)Pacman doesn't dig the 'Mexicutioner' nickname;only a total nitwit could've come up with that term.

Question...Anyone know how many times the great Gaspar Ortega appeared on national TV? I'm writing an article about him, which is why I;m asking....