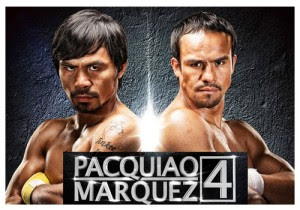 
Juan Manuel Marquez and Manny Pacquiao will get it on for the fourth time tomorrow night, Saturday, December 8, 2012, at the MGM Grand in Las Vegas, Nevada and will air on HBO PPV. It will be a twelve round welterweight non title affair, or at least it was, until the WBO, in their infinite wisdom, decided to create a title belt for this fight entitled “Fighter of the Decade”, presumably to elicit some sanctioning fees from from both fighters. A worthless belt considering no other fighter from the past decade has been asked to participate.

When the fight was first announced earlier this year, I was feeling somewhat hopeful about Marquez' chances for redemption and justice but as the fight nears I have been a feeling little less hopeful, a little more pessimistic. I don't know if anything less than a knockout will give Marquez a win. Going by past history, Marquez may have to knock out Pacquiao just to earn a draw.

I have written Ad Nauseum about these two fighters and there battles and who I think has won, and so on and so on. It would be redundant to do it again. Still. It's my hope that Marquez will find that one thing he has to do to separate himself  from the last three fights and come up with a victory. Counterpunching has been the key to his success in all three fights (success being a relative term here). He needs to up his aggressiveness and he needs to find little ways to frustrate Pacquiao, who has shown a penchant lately to get frustrated in his fights, and certainly in his last fight with Marquez. Pacquiao has a tendency to get reckless when frustrated. Marquez has always been able to get inside the head of Manny Pacquiao. He needs to amp up that strategy.

Both men feel they have something to prove but I think Pacquiao has found it easier to live with his victories than Marquez has with his losses. That may prove to be his great motivating factor tomorrow night. Regardless, it may just be the last great fight for both of them.

What I do want, what I'm hoping for tomorrow night is a good honest fight and a clear cut winner. Though it's no secret that I am a fan of Juan Manuel Marquez, I want to see an honest end to this great rivalry. If Pacquiao wins this fight, so be it. He has been great champion over the last decade and he is a fighter that I respect. Wanting Marquez to win in no way indicates how I feel about Pacquiao. I'm just a fan of Marquez, he's my fighter. If Pacquiao win this fight it's time for Marquez to accept the loss and move on. As always, let the best man win.
By Randy De La O at December 07, 2012